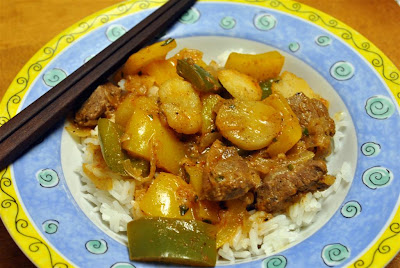 I cook stir-fries all the time for dinner - but just realized I don't really have a recipe posted for one. Normally, that's because I don't really follow a recipe: I just throw things in until it tastes right. But since I hardly ever cook lamb, I don't usually just wing it for that. I have a great Thai recipe book that has the following recipe (though I modified it according to ingredients I had) that both Pat & I enjoy.
Red Lamb Curry
Ingredients:
1 lb lean lamb (or less), cubed
2 tbsp oil
1 large onion, sliced
2 garlic cloves, minced
2 tbsp Thai red curry paste
2/3 coconut milk
1 tbsp brown sugar
1 large bell pepper, chunked (I used 2 since I used less lamb)
1/2 cup lamb or beef stock
1 tbsp Thai fish sauce
2 tbsp lime juice
1 can water chestnuts, drained
basil, cilantro, salt & pepper
cooked jasmine rice, to serve
Methods:
1. Since I used 2 bone-in shoulder chops, I removed a lot of fat & bone before getting to the meat. As a result, I didn't end up with that much lamb - but just enough for Pat & I. As a substitute, I used 2 bell peppers (I like the added colour - though red would have been better than yellow in this case). This way you get a higher veggie to meat ratio, which is how I like my stir fries anyway.
Start by heating the oil in a wok or large frying pan over high heat. Add the onion & garlic. Fry for a couple of minutes, until softened & fragrant. 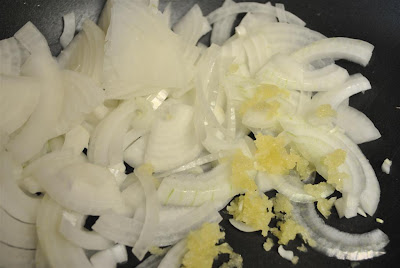 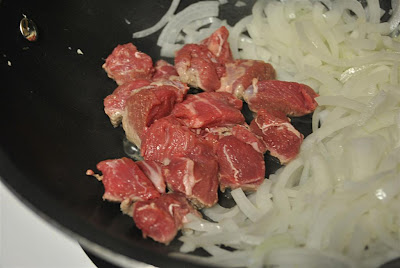 Fry the meat quickly, until lightly brown all over. 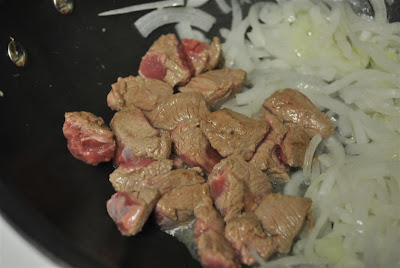 3. Push the meat & onion aside & add the curry paste. I used a bit more than 2 tbsp since I was finishing up the open envelope of curry paste. 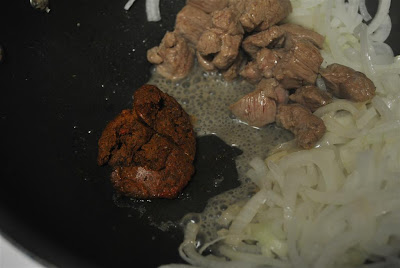 Cook & break up the paste a bit before stirring it all together & letting it cook for a few seconds. 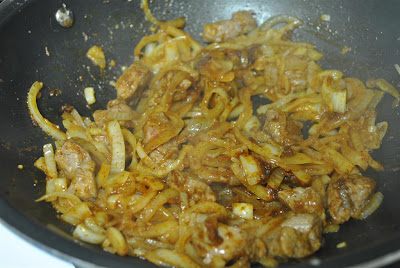 4. Add the coconut milk & sugar. Bring to a boil & cover. Reduce the heat & let it simmer for about 15 minutes, stirring occasionally. Now is a good time to get that rice going. 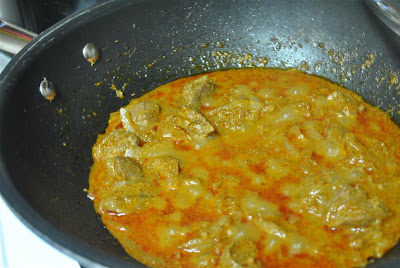 5. Add the bell pepper, broth, fish sauce & lime juice. Cover again, and continue simmering for another 15 minutes or so. This is to allow the meat to get really tender. 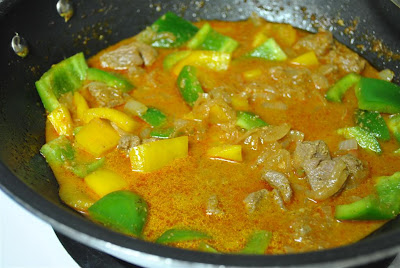 6. Add the water chestnut & seasonings. Taste & adjust. The recipe called for 2 tbsp each of fresh basil & cilantro, which I didn't have. It was fine with dried basil, but the herbs would add a whole other level of fresh flavour. 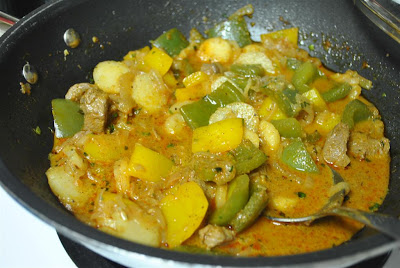 Serve on jasmine rice (chopsticks are optional, but I like to use them at home as practice for when I eat out in an Asian restaurant!). 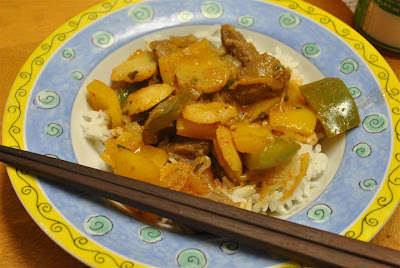 YUMMY! DH and I love curries - need to trey this! Thanks for sharing!

You are making me hungry!!! I Love curry, and your pics are scrumptious looking!!! Thanks for the recipe!

Yummy! I'm a fan of the green curry's with coconut milk...Mmmmm :) I need to make it again sometime!