Pat & I went to the Royal Ontario Museum (ROM) in Toronto on Saturday. It was only the second time I've been, and Pat's first, and it was an amazing experience! The special exhibit we went to see was the Dead Sea Scroll - you can't take pictures of these exhibits - but it was incredible!

The architecture of the ROM is also pretty amazing. And a little confusing - we got turned around trying to find the dinosaurs. Pat was taking pictures quickly, so a lot of them were blurry - but a few turned out. Here's a great picture of one of the stained glass windows. 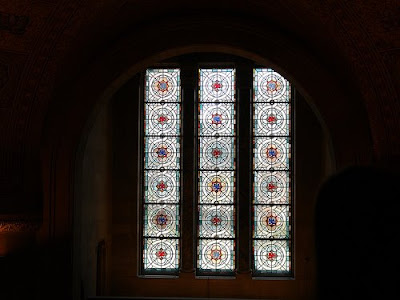 The ROM has a "main entrance" with a large atrium & open staircases on each side. Of course, you have to enter by the side since there's more room for the ticket sellers there. Still, the mosaic ceiling of this atrium is remarkable - the gold was really brilliant. This wasn't Pat's best picture - you can just make out what it says: "THAT - ALL MEN - MAY KNOW - HIS WORK." 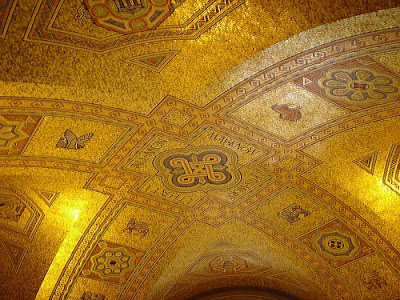 Within the open staircases, there are totem poles. 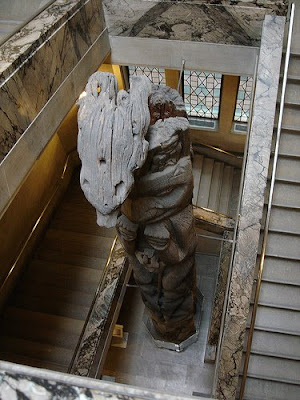 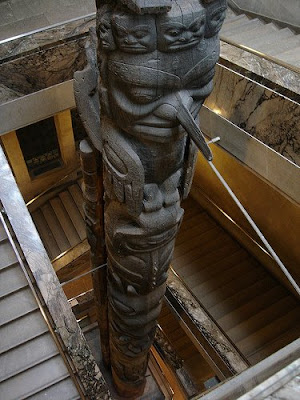 After the Dead Sea Scrolls exhibit, we had lunch. Then we went upstairs to see Biodiversity, mammals & dinosaurs (Part 2 & 3) and a special exhibit on minerals & gems (Part 4). Up another floor, we browsed through Ancient Cyprus, Greece & Medieval stuff - and then it was time to go. Unfortunately, the battery of our camera died by the time we made it to the 3rd floor, so I only have one picture from there.

We were incredibly lucky actually - there was an exhibit on the 3rd floor that was supposed to close July 9th, but was still there. It was The Book of the Dead - Amet's (something or other, I don't remember his full name) Book of the Dead. The lengthy scroll was laid out with explanations - it was so interesting. If you were a well off Egyptian, you had a book commissioned to ensure your safe arrival in the afterlife. The spells & drawings in the book were meant to guide his way. This one pictures shows Amet (in a white robe on the right) with some gods, while his heart is being balanced in the middle. If his heart doesn't balance, the monster in the left middle (on a throne) will eat him. 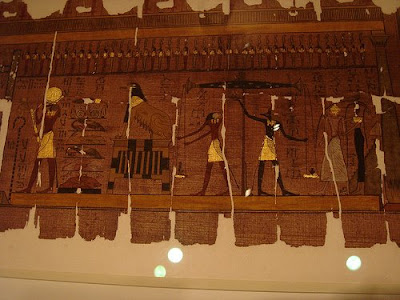 The drawings were exquisite. The hieroglyphs, as well as the Aramaic/Hebrew of the Dead Sea Scrolls, were so precise, regular & perfect. Mind-blowing, absolutely mind-blowing.

So neat! I took an Egyptian class, two years ago I think, and we had gone to the ROM that summer...I was in love with the Egyptian exhibit since I knew what was all going on - we even learnt to read some hieroglyphs. I think James was happy to leave it - b/c then I'd stop trying to teach him about it all (and he was more into the Dinosaurs lol)...I don't remember much of it now though :(

Wow! I just checked out all your pics 1, 2 & 3--fabulous! What a great place to visit! I think I'm going to have to add the ROM to my list of places I want to go!
Smiles, Karen