Two days ago, I couldn't have told you who Gustav Klimt was. Now, his name comes out of my mouth nearly every second sentence! I wanted to tell you about my journey with Klimt.

As I'm sure I've mentioned before, I take part in a weekly challenge / ACEO (art card, editions & original ~ mini pieces of art measuring 2.5x3.5") swap. MAMMA's swap to be specific. This week's challenge was Klimt. I had to google him to discover his very recognizable paintings.

I wasn't sure how to make my ACEO. So I compiled a Klimt treasury for inspiration. 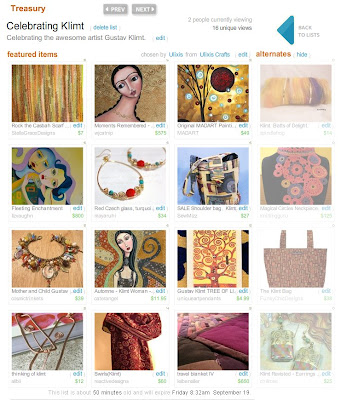 I soon realized that Klimt's style is very similar to mine. Here are a few sketches from some of my notebooks as examples. 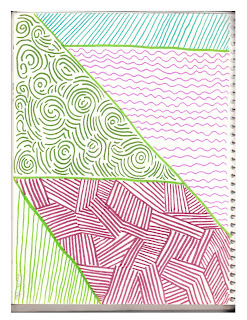 This one is from my high school notebook, dated November 2003, using markers. 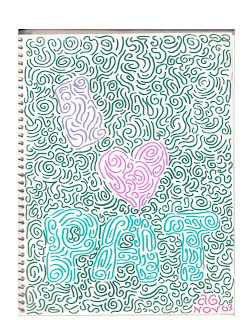 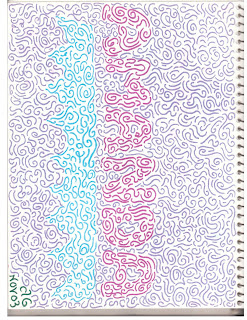 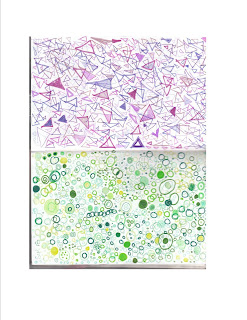 This one is from a notebook I made for myself, and is dated September 2007. One page is filled with circles, the other with triangles. I used markers, highlighters, pencil crayons and pens. 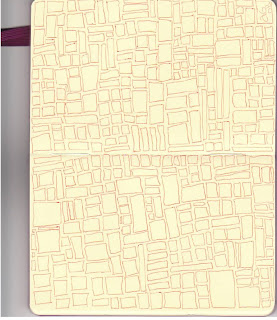 Finally, this one is from my moleskine notebook and is dated sometime in the summer 2008. These pages are filled with orange pen squares.

Now Klimt's style not only includes intricate patterns such as these, but often centres on a strong female figure, often with a phallic shape, bent neck and bright red hair. Warm colours, such as spicy orange, deep red and gold, are very predominant in his work. So I decided to include these elements in my ACEO. I decided to use a mixed-media collage technique.

NOTE: Since my camera's adaptor is still broken, and the new one isn't in yet, these pictures were all scanned. So the beauty of the collage and the brightness of the papers is a little off.

This is my Klimt Aphrodite, she was my first: 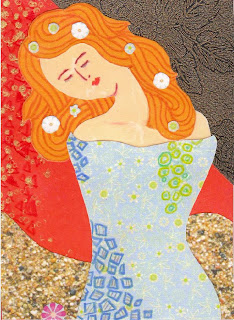 I had planned on making this for the swap... but I can't part with her. She is too beautiful! I used patterned paper for everything, then used pencil crayons to draw in her hair, features, the design on her dress and on the background. I also used gold paint and a polka-dot stamp on the background.

I love her so much, I just had to make more! This is Hera, and she is being swapped for MAMMA's challenge: 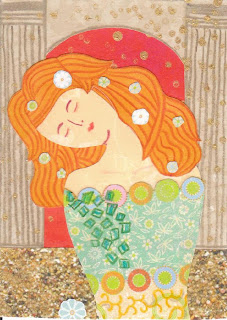 I'm also swapping a few ACEO's with bellsakabin, so I made a goddess, Artemis, for her too: 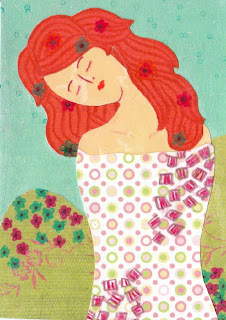 This time, I used more pastel colours, since that is more my style than Klimt. I also drew the flowers in felt-tip pen instead of collaging them.

I'm going to add to my Klimt goddess series, but I'm not certain if I should change up the goddesses pose or not. I'll have to think about it... let me know what you think!
Posted by Amanda at 7:14 PM

Hi Amanda, nice work and more than a hint of Klimt

Why arent the Goddesses on your ETSY? Huh? Huh?

Yea, I'm pretty excited about wearing the scrubs! (mon, tues and fridays are comfy days); and I even have pepe le pew ones, eheh.

My name is Cindy said...

Ooh these are lovely.