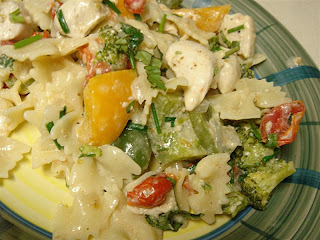 I think you know by now that I like trying new recipes. I also enjoy making recipes my own, depending on Pat's and my tastes and what I have available in the kitchen. Last night I had planned to make the Pioneer Woman's fafalle with zucchini and tomato. Except there's no meat in this recipe. Pat would never have a meal without meat. So I decided to add chicken and nothing more (sorry, I recently bought a beautiful book of E.A. Poe poems and tales and I was reading the Raven last night... and now I shall speak of this nevermore. Except it's such a beautiful book I may have to post about it).

So I cut up and cooked the chicken first. With some salt and pepper, but the recipe calls for lots of fresh herbs at the end, so I didn't season too much. I like to over-season sometimes but I refrained. Except with the salt and pepper.

Then when I came to cut the zucchini... I found it was moldy. Damn it. Change of plans. I had peppers (orange and green) and broccoli, as well as the onion and tomato the original recipe called for. So I chopped up all these veggies, as well as some fresh herbs, whatever was on hand. I had basil, chives and oregano.

At least I'm sure it was oregano. The grocery checkout clerk didn't believe me and charged for cilantro (mostly because she didn't know the code for oregano). I know it wasn't cilantro, I know what cilantro looks and smells like.. I hope it wasn't more expensive... 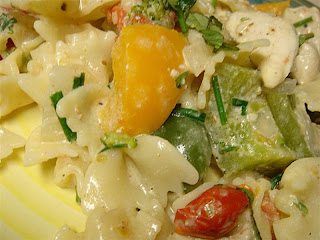 Anyway, pasta's boiling, let's fry up some veggies. I really wish I had some pictures, but when I'm cooking I'm not thinking of recording the process. I started frying the onion and garlic, then added the peppers. Then the broccoli and chicken. And finally the tomato (and salt and pepper). I only let that cook for a little bit. Then I added 1/3 cup of pasta water (I didn't have the wine or broth the recipe called for) and 3/4 cup cream. Heavy cream. Mmmmm...

Tossing it all together was the best part. Put the drained pasta in a bowl. Top with lots of chopped fresh herbs. Top with the chicken/veggie/cream mix and toss. Add more salt and pepper, herbs and some Parmesan cheese. Make sure to taste test often. Because it's delicious!
Posted by Amanda at 9:03 AM

rose AKA Walk in the Woods - she/her said...