So Pat is all about surprises when it comes to gift giving (he gets it from his family). Here's what he did for my birthday:

When he came home with gifts on Wednesday, he hid them in the bedroom and told me one was hidden and another was hidden under a rug in the bedroom. It was pretty obvious, out in the open.. a fairly big box. I had no idea (until later I remembered a conversation we had).

When I got home from work on Thursday (my birthday), he had "wrapped" my gifts. He had his last 2 wisdom teeth pulled, so he wasn't really in the mood. I did have a large box from my parent's birthday package, so he "wrapped" something in there (and drew flowers and "I (heart) U" on the box). There was also a small gift bag and a card.

In the bag: a small egg shaped terrarium with seeds for a fly-catcher. So cool! I really hope it grows... Then Pat asked me to gently shake the big box. It was SO heavy! Inside: my old textbooks and a terrarium-style herb garden. I really, really hope they grow! I've always wanted to grow herbs (and other things) so I was pretty happy. But sneaky Pat had something else up his sleeve!

"Sit down and close your eyes." Heavy box placed on lap ~ and this one is actually wrapped! And I had guessed right: 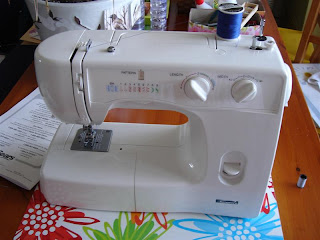 It's a Kenmore and has 51 stitch options. I LOVE it! I've already picked out (and started cutting) my first project: a pincushion. Nothing fancy, but I barely know how to use the machine! Starting small... besides, I need to organize my needles. So I figured it was a perfect starter project. 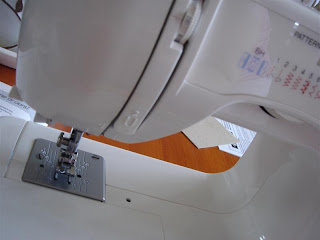 I chose Heather Bailey's square pincushion pattern. It was simple enough, but I had some trouble. It didn't line up exactly right, and I sew slightly crooked... I also forgot to put down the foot a couple times... But all in all, it didn't turn out too bad.

I'll post pictures tomorrow when the light is better for taking pictures. I'm not done besides. The pattern calls for sewing ribbon around the square... I had one needle that fit a pretty yellow ribbon. I got it through the material, but it got stuck on the stuffing... I pulled and pulled and finally broke the needle. So I managed to find another needle with a tiny hole, but bigger than the majority of my needles. I barely fit a thinner turquoise ribbon through. I tried to move the stuffing out of the way, but it wasn't good enough. I broke that needle as well. Arg. I had a couple more that seemed the same size, but for the life of me I couldn't thread the ribbon. I frayed and cut away 2 inches before giving up.

What a great present!