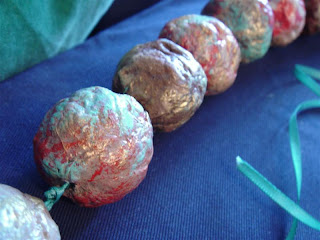 Remember those recycled paper mache beads I started last week? No? Then scroll down a post and take a look at those pictures.

Since then, the beads have dried and were ready for drilling and painting. I drilled a hole into each one myself... which was fun. I don't think I've ever used a drill before, although I've seen my dad and brothers use one on many occasions. Then I painted them. 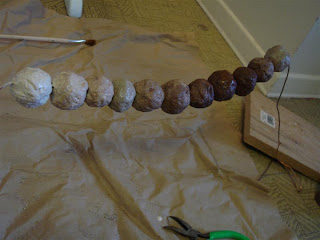 I started out giving them a brown-ish base coat. I used 4 different colours of brown and an off-white. I wanted to start with different shades for the base so that the beads would have more variation. 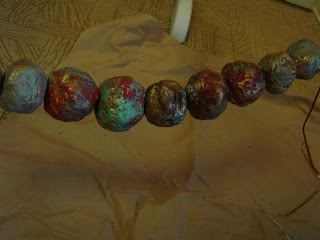 Then, using a paintbursh, paper towel and/or sponge, I added some red and turquoise (as well as a cactus/sage green and some off-white and brown here and there). I finished them off by sponging on some gold paint. 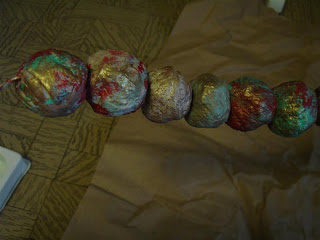 Sorry, those are some dark pictures from last night. After that, I added a sealer and let them dry. 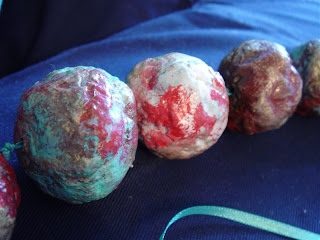 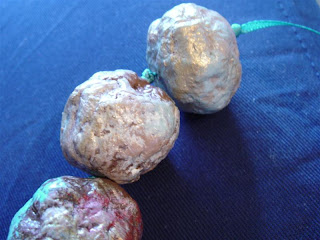 The next step was stringing them onto a pretty turquoise ribbon. Thankfully, the ribbon is fairly thin (4mm) so it wasn't too difficult to string them. 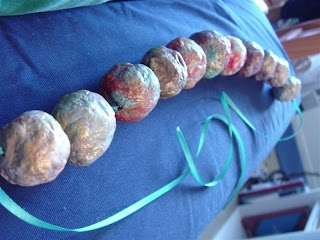 There they are this morning, all strung out on the ribbon (and looking a little washed out). Now I just need to finish it off with a clasp of some sort. I'm going to use a loop and a button as a make-shift toggle clasp. I've narrowed it down to 5 buttons: 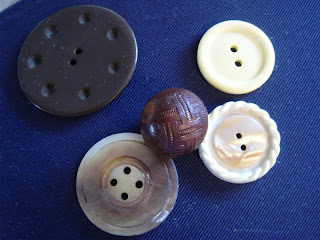 They're all vintage except for the soft yellow one at the top right (it looks white in the picture, but it is yellow). The one in the middle is a wooden ball with the hole in the back, which would make an interesting clasp. The one at the bottom right is mother of pearl (the other side is the irridescent white side) and is the one I'm leaning towards. The other two are plastic, one large and brown and the other cream with an orange irridescent centre. Which do you think would look best?
Posted by Amanda at 11:01 AM

rose AKA Walk in the Woods - she/her said...

Great beads! Wonderful idea and they look good too!

i love up cycling.