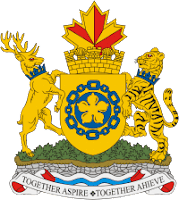 I moved to Hamilton 5 years ago to attend McMaster University. Most people I talk to don't like the city, but it's the first big town I've ever lived in, and for me it was love at first sight.

I don't know much about the city, but it is an old town with a rich cultural history. The town was conceived by George Hamilton when he purchased farmland after the War of 1812. It took some time for his idea to take form, but a police board and city limits were defined by statute in 1833. Many of the old buildings are still around today, and quite a few have been converted into museums or historical sites.

I guess one of the reasons many people don't like the city is because our economy relies a lot on the steel mills. On hot summer days, the smell and smog can be a little unpleasant, and I do get some thick black dust. But I love to go for walks through the old neighborhoods, and dream about living in any one of the mini-mansions.

While browsing through Wikipedia, I found out that Hamilton has a coat of arms, shown above, as well as a flag! I rather like it, with the pretty flower and chain. 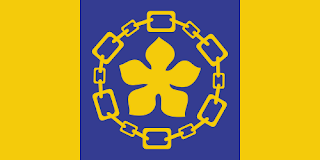 Here's Hamilton's skyline, as seen by the edge of the escarpment, or mountain. You're basically looking at downtown Hamilton. Behind you is the mountain, a whole city in itself ~ to the right is the East end and Stoney Creek and to the left is Westdale with the University, as well as Dundas and Ancaster. I live near that tall building on the left of the photo. In fact, if you look closely and know what you're looking for, you might be able to see my apartment building. 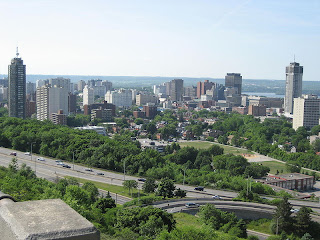 I don't know how long I'll be here, but I'm enjoying it while I am!

I live in Ottawa and I think what makes a great city is the pride of it's citizens and their willingness to share their home-town with others through various events and festivals. Ottawa has SO many attractions and festivals that there is something for everyone to enjoy. Add to that the beauty of downtown and the parliament buildings, the diverse architectural styles and of course the Rideau canal and you've got yourself one fabulous place to live or visit!