Recommend: The Song Of Achilles 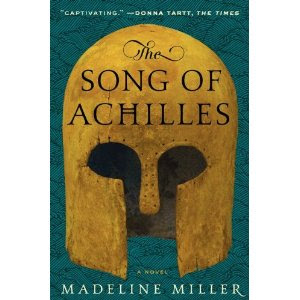 However, I have come to realize that I do actually really enjoy history. Ancient history in particular, but add an interesting plot or characters and I'm hooked. History class would have be so much more interesting if we could have read fiction (full of historical facts) instead of stuffy old textbooks!

One of my favourite tales from Ancient Greece is Homer's Iliad, or the story of the Trojan war. I remember when the miniseries, Helen of Troy, came out in 2003. I loved it (even better than the movie Troy, which was decent). Besides Helen - the face that launched a thousand ships - Achilles is probably the most recognizable character from the myths, one of the greatest heroes of the war. The part I remember most from his story is when he goes crazy with grief over the death of his friend, Patroclus, and finally takes up his sword again to fight for the Greeks and obtain his revenge, despite knowing that this will culminate in his own death. I always wondered about that and the nature of their relationship; what was it about this unassuming man that could inspire such loyalty?

Evidently, I wasn't the only one wondering. Madeline Miller was thinking the same thing when she came up with The Song of Achilles, her first novel. This is Patroclus's tale, a fresh take and perspective on a well-known myth. Instead of focusing on the war, Miller sheds light on the boys' childhoods, the events that lead up to the war and the relationship between the two men. It is a beautiful narrative and one that rings true to me - it just feels right, filling a gap that I hadn't quite noticed was there. Miller brings Patroclus's voice to life, revealing a sensitive and loyal soul. Incredibly well-written, the story sucks you right in from the very first word. I highly recommend it.

What are you reading right now? I'd love to hear your recommendations for more novels set in Ancient Greece!
Posted by Amanda at 8:07 AM

Not fiction, but A History of Histories is on my back burner at the moment. The whole thing is a kind of meta take on Western "history of the world" and so naturally there's a lot of Greek history and historians involved.

I love Greek and Roman ancient history, and I have a minor in it to prove it LOL...my favourite part was looking through their literature, and at the key elements to decipher it and apply it to what may have been how they lived, their ideals, and their morals.

Hello friends!
You feel the ringtone of your mobile phone is boring? You want to own a unique and fun ringtones on your phone? I will suggest to you the list of the best ringtones for the mobile phone, you can consider to download to your phone.

All ringtones are downloaded for free. Hope some of our updates can bring a whole new look to the ringtone market worldwide. To learn more about the latest ringtones, you can visit homepage: https://bestringtonesfree.net/