So Pat and I made a New Year's resolution to get healthier this year. We need to start eating better and more regularly (sometimes we don't eat until after 11 because we don't know what to have, and sometimes Pat gets home really late) and we need to start incorporating some exercise into our lifestyle.

Exercise is SO not my thing. I grew up in the middle of nowhere, so there wasn't really an opportunity for me to go to a gym (which means if I went now, I'd have no idea what to do other than stand nervously at the door with my gym bag). I had gym class up til grade 10, but that was it. To make matter worse, I was a fat kid, so I never got into sports (being chosen last, and coming in last place all the time can get pretty humiliating, so I just avoided sports at all costs). Once I hit high school, I grew into my weight, but I had never participated in sports, so I didn't exactly want to try anything for the first time and make an idiot of myself (that's back when I cared what other people thought :P).

So now I'm stuck. I don't really know how to play any sports, especially if it involved working with a team, and there's no way I'm going to the gym. We've tried to go biking in the summer time, but it's a pain to drag our bikes up and down the elevator. So this winter I decided enough was enough. I signed us up for badminton. 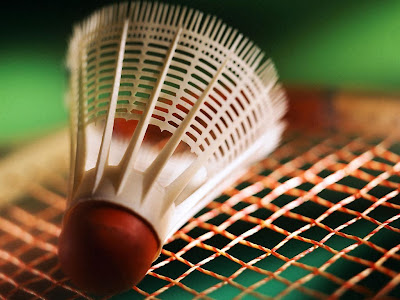 I chose badminton because I remember it being something I could play relatively well in high school gym class ~ there's isn't too much hard work or coordination involved. Plus, I signed us up at a recreation centre, so there aren't lessons or teams, just open gym time with the nets set up and rackets and shuttlecocks to use. We go Tuesday nights, from 8 to 9:45.

Tuesday was our first session. It was SO MUCH FUN! There were 3 nets set up, with doubles playing in the first 2 (they were really hardcore badminton players) and a couple playing on their own in the last one. We went and joined them, and were lucky to find out they weren't much better at playing than us (they had signed up for the exercise too). We played a few sets with them, and it was a blast! My arm was sore the next day, but I'm really excited for next Tuesday!

Here's to keeping our resolutions this year!
Posted by Amanda at 9:57 AM

Ah I'm also one of those people who stand in the gym wondering what the machines do... though I'm glad you found badminton to be so much fun! I stink at it but it's always fun... hope you venture to other sports.