Seems like I've more or less been missing in action in the blogging and Etsy world this summer. And while I don't really have a good excuse for it, once you get out of the habit, it takes a good kick in the pants to get going again. But it isn't like I haven't been busy... here's how my summer's been so far..

(warning: this is going to be long.. with lots of pictures!) 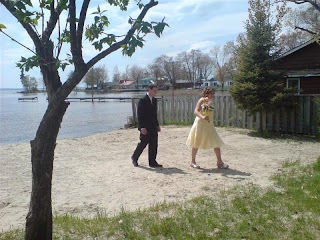 First off, May 16, 2008 was my older brother (by one year) Matt's wedding to Terri-Anne. It was a small wedding at the minister's home. Pat and I were the maid of honor and best man, and then the kids, parents and grandparents were present. It was really intimate and just perfect.

Afterwards, we went out for lunch at a small bistro on the waterfront in North Bay. Luckily, the weather was gorgeous, and we were able to take pictures on the beach in front of the water (that's the bride and groom on the beach). Terri-Anne's friend took the pictures, and they turned out really well. I wasn't on the ball with the camera, so I only have a few to show. 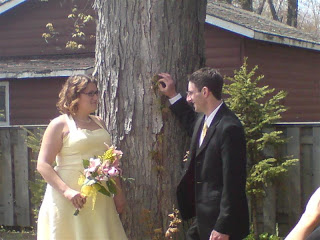 Here's my brother and his bride, casually posing by a tree. Terri-Anne's dress was handmade by a woman they play darts with, and she made a matching dress for Jaden, Terri-Anne's 5 year old. The three of us also had beautiful bouquets of pink lilies and delicate yellow flowers. My dress is the same dress I wore to graduation, which you'll see below and have seen before, and is a gorgeous orange and coral colour. Matt and Pat matched their ties really well: Matt to Terri-Anne's yellow and Pat to my orange. I love matching ties. 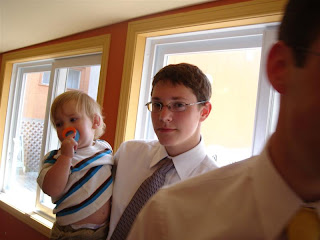 Matt and Terri-Anne's baby, Edward, was very good for the ceremony... but he was still all out of sorts. Where are we and who are all these people (he doesn't see us very often)? He was comfortable with Uncle John, my younger brother shown here, since Matt's family lives about a 5 minute walk from my parents, where John still lives (he just graduated from high school actually). I can't believe how grown up John is!

Here Eddy is cuddling up to his older brother Dustin in the car on the way to lunch. 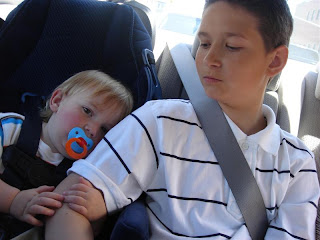 And here he is playing with his dad. 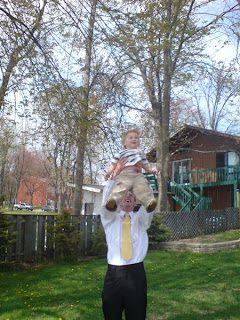 He's such a sweet baby. You should see his golden curls!!! As I said, he was really good during the wedding, and only once ran around the restaurant naked... But that was only because he really, really enjoyed the wedding cake. 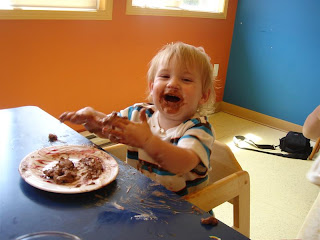 Just look at that face!! Too precious for words!

They headed off for their honeymoon right after the lunch. The reception / party was this passed weekend, on June 21. We had a great turnout (it was at my parent's place), the food was great and went really well, and we partied late into the night with bonfires. It was so much fun. Of course I didn't get any pictures though. I was too busy socializing and helping serve the food. But it was really a lot of fun! 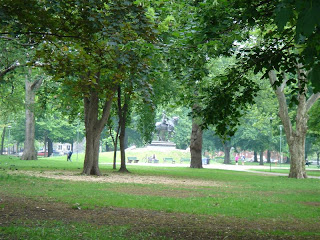 Now in between all that was my graduation, and a lot of shopping, running around, sight-seeing and just generally having fun with my friends before they leave... We're all grown up now and parting ways. I'm going to miss the biopharmers...

But first, the fun times! Early this month I went to Toronto with Sharon and Lina, my two closest biopharm friends. The picture at the left is of a statue of a horse, glowing in the middle of that park we walked through. This is us at graduation (I'm on the left, Sharon is in the middle, and Lina is on the right). 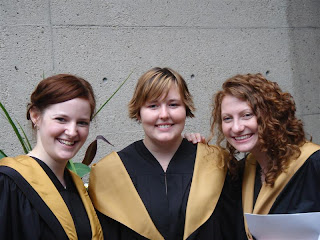 We did some shopping, sight-seeing, eating and walking around, and eventually made it to the ROM (Royal Ontario Museum).

Unfortunately, I couldn't use my camera for all of the exhibits, and for the most part, it was quite blurry and dark 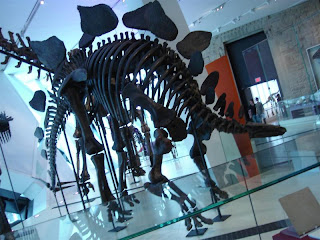 . But we did see the dinosaurs, and I did sneak a few pictures of the Darwin exhibit, which is what we went to see and where we couldn't take pictures. I thought this iguana was pretty cool, and it was really hard to tell it was alive. 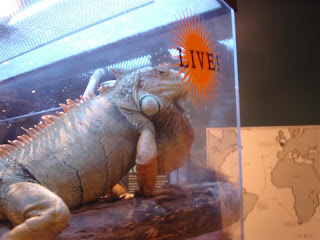 You could barely see it breathing!

Next, just over a week later, the three of us (and Lina's fiance) went to Wonderland. I didn't bring the camera since it would have only been in the way. And I didn't pay $12 (or more) for those crappy ride photos, or movies which I wasn't surprised to see also available for some rides. It also rained on and off all day, but that only helped to shorten the line-ups. The newest ride, the Behemoth, was AMAZING! Supposedly the longest, fastest, tallest rollercoaster in Canada, it was an amazingly smooth and exhilarating ride. We went on twice in a row, it was just that good. 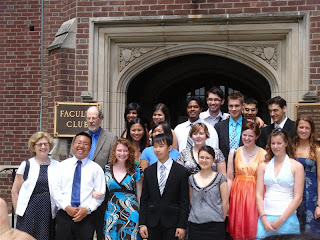 Finally, in between all that was convocation. My undergraduate graduation. Here we all are at the reception after convocation. Probably the last time the biopharmers class of 2008 would all be together. It was a fun day, but tinged with sadness too. At the left is Denis, our program director, and Eva, one of our teachers. I'm the one in the bright orange/red dress... which I love!

Pat, of course and as usual, was there to support me. He even walked me downtown early, since I had to be there early and then had to make the trip back again because he forgot his ticket. Silly boy. But he made it in time, and somehow found my parents, who took a taxi from their hotel, among the thousands of people there. 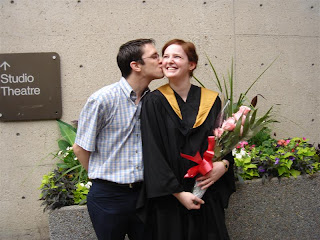 In this cute picture of us, you can just barely make out the beautiful gold watch he and his parents got for me for my grad.

Yep, my mom and dad came down for my grad (as if they wouldn't), and it was my dad who bought me those gorgeous pink roses (although mom did pick them out). Here we are, after the grad. That white envelope I'm clinging to holds my diploma, which actually turned out to be quite a large piece of paper... And once framed, it's huge and very impressive looking! 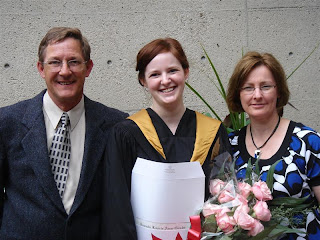 Even though Pat and my parents were seated fairly far back, Pat was able to get a couple of great shots of me when I was on stage. MAC does their ceremony traditionally. PhD graduates are honoured to have the registrar stand as he shakes their hand and confers the degree. Master's students have to bow to a seated registrar and undergrads have to kneel to the seated registrar. It's hard to see, the registrar is in the middle of the stage, wearing gold (pointed out with the blue arrow). 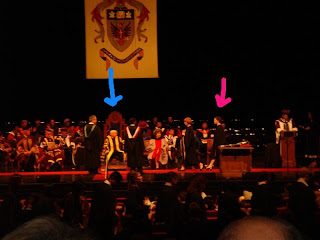 In front of him, with green and white/red hoods and black gowns, are the two people who hood the undergraduates. Two undergrads went at a time since there were so many kids. You can see two girls walking up onto the stage at the right, I'm the second one (pink arrow).

This next picture shows us actually kneeling as the registrar confers our degree. It was a little imposing, but not too bad. The ceremony went by quickly enough, and the speakers weren't too boring, 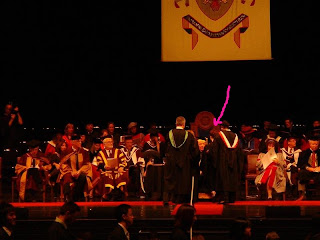 though a little scripted.

Well, I think that brings you pretty up to date with my summer. I'd say it's going pretty well, though I was sick for quite some time, and haven't even started working on my Master's yet. I'm supposed to be starting in the lab July 2, which is coming up really fast! I've been so lazy, I don't know that I'm ready to go back... but I think once I get into the routine, it'll be good to be back.

I know Ulixis has been a little quiet lately, but I am going to try to get things up and running for real! I just posted some sunshine lily earrings though, so you should go check that out while you wait for more!
Posted by Amanda at 10:48 AM

COngratulations on graduating, and tell Matt congrats on the wedding! I had to kneel too for my graduation, it's weird, and then the guy who I kneeled infront would make random small talk while I was hooded....a little aqward, becuase you know he's going to forget heheh. I still love the dress that you got! It's so neat that it was featured in a magazine :)