My baby isn't such a baby anymore. In fact, it might be time to start referring to him as a toddler... he is toddling around now, after all. 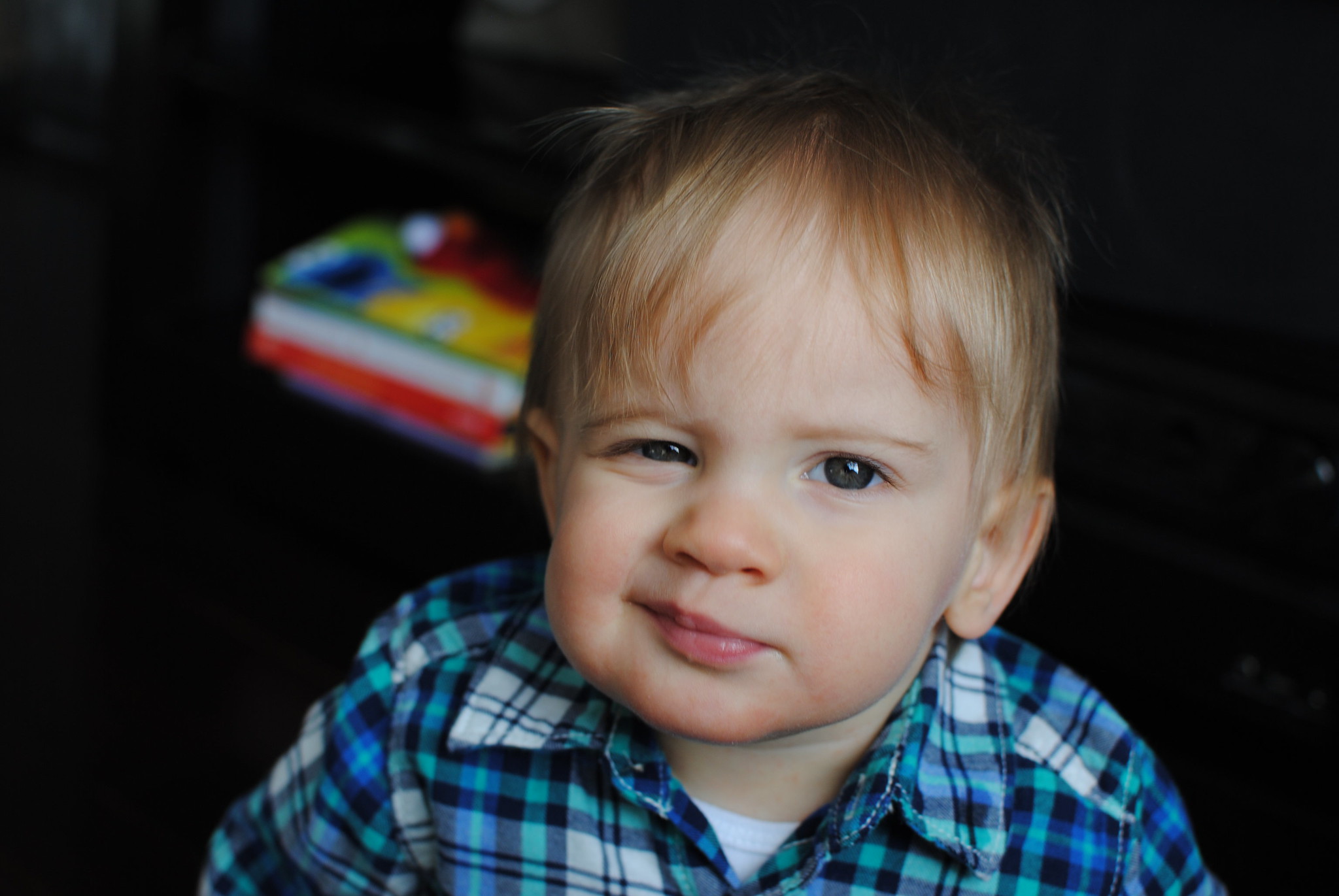 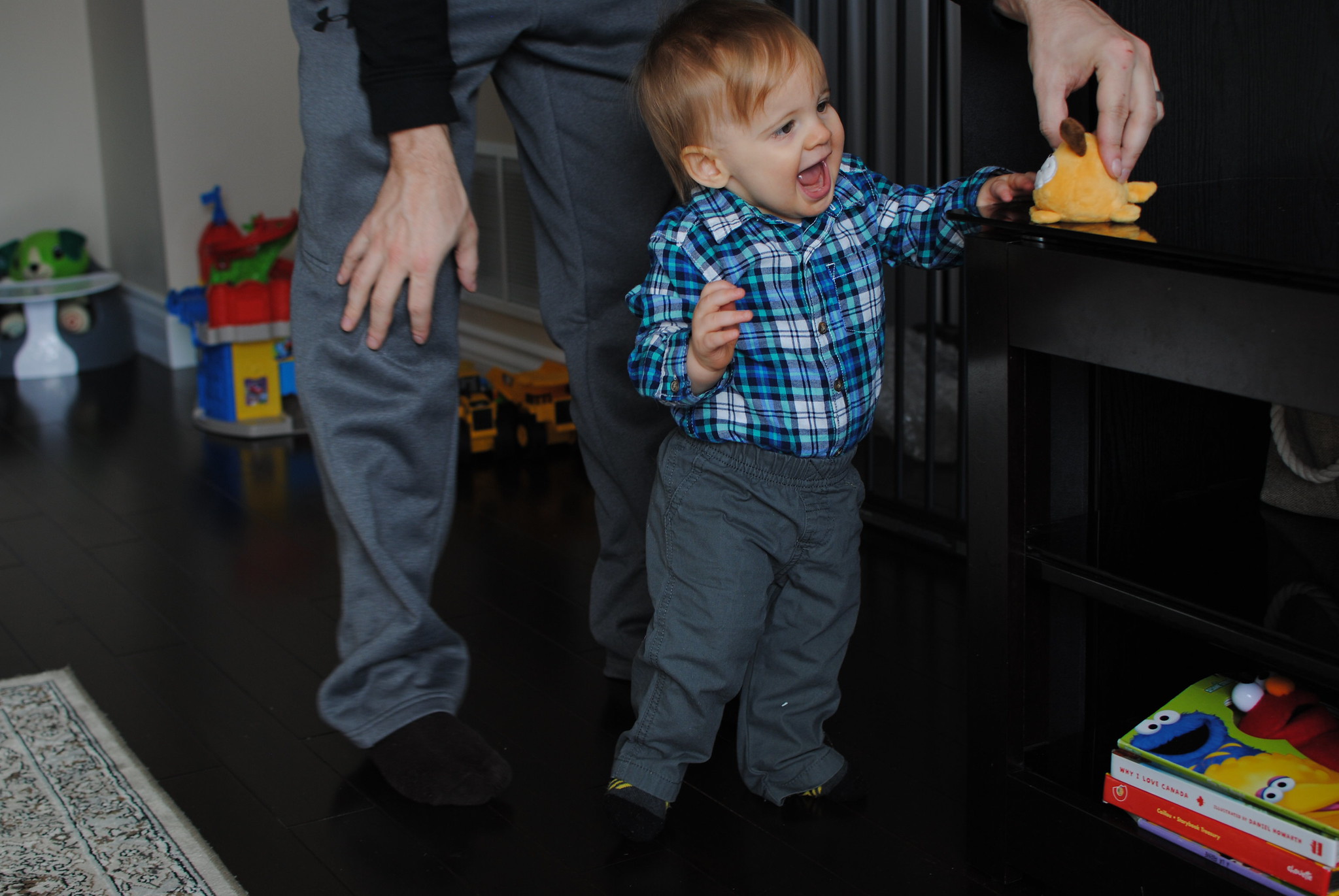 That's right. Marc turned 11 months old at the end of December, and he's been taking some unassisted steps. In fact, he's managed about 4 or 5 in a row (and more than that by now). He's still tentative - and still prefers to do it on him own. If we try to stand him up, he usually flops down like a limp piece of spaghetti. Mr Independent! 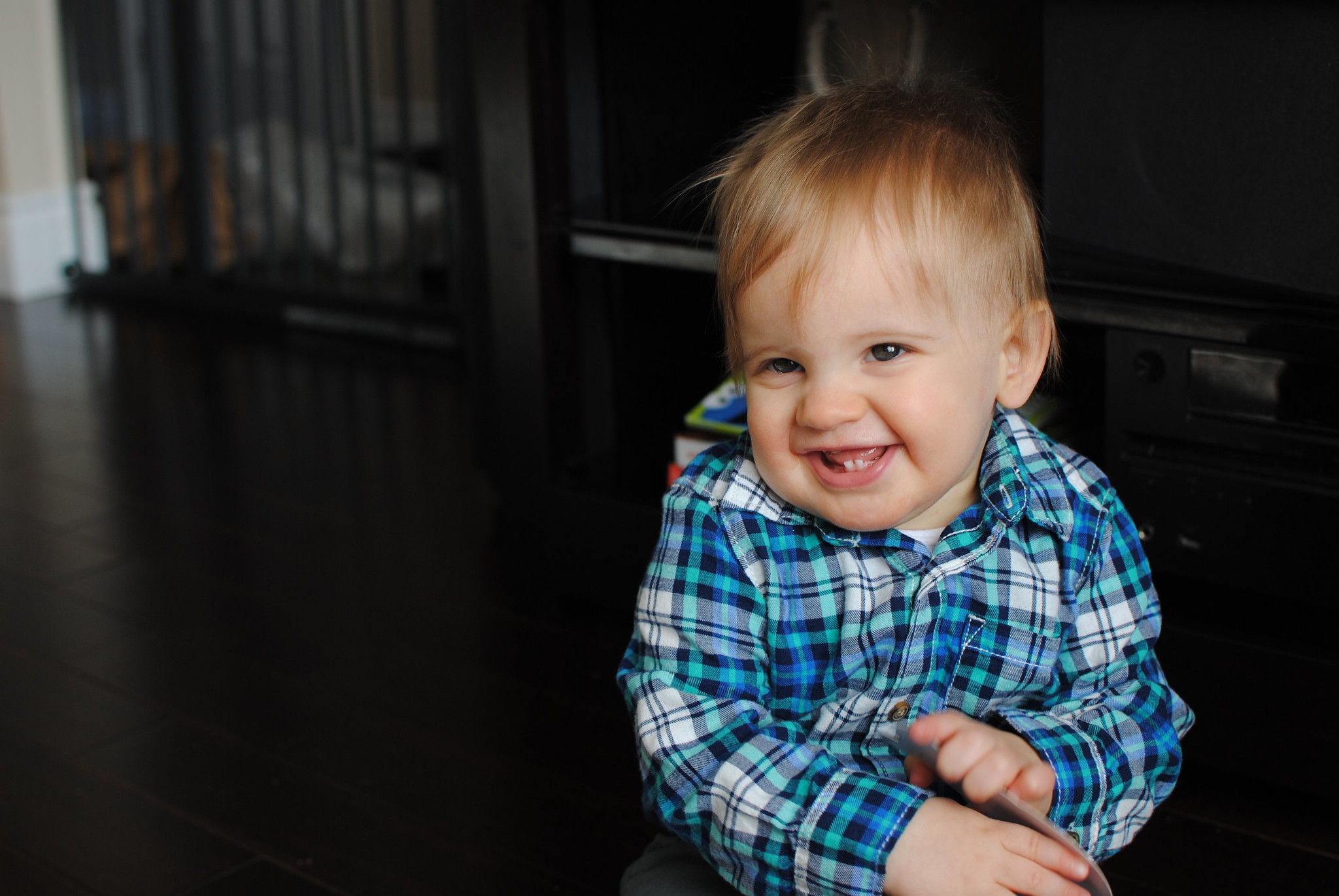 He is still not a fan of napping... the week before we left on holidays, he was taking very short naps, once a day. The other "naptime" was spent alternatively crying, screaming and chatting away with himself in his crib. Napping over the holidays? VERY difficult (understandably so - strange place, strange bed and, in the case of my parents' place, a not-so-dark room to boot). Luckily, our parents live about an hour apart, so he at least got a few naps during those drives. And Pat became very good at putting him to sleep before putting him down, since he wouldn't put himself to sleep like he usually does at home. Now that we're back home, things have levelled out - naps are still iffy, but better. And he sleeps like a champ at night (around 12 hours), so I can't complain. 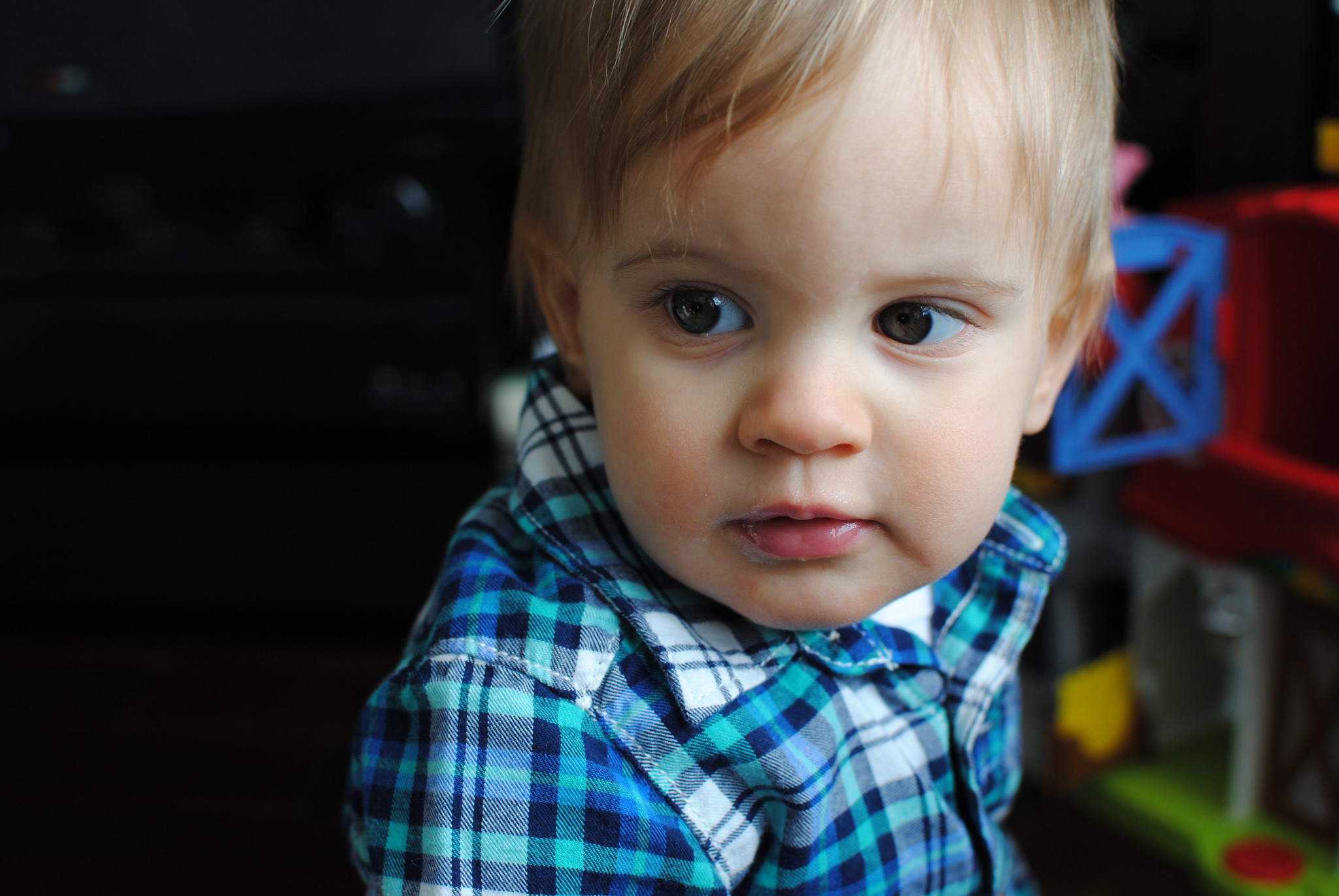 Marc eats very well - he just isn't a big fan of veggies. Sweet potatoes are his favourite and carrots are pretty good too. Anything else? Not so much. He did eat a lot of mashed potato over the holidays, but only so much before he refuses. Fruit though? Yes please! He LOVES fruit, as well as crackers, "cookies" (arrowroot, digestives or graham crackers), cheese and whole grain bread. He'll eat scrambled eggs if I cook them with apple and cinnamon. And he often has leftovers from what we've had for supper (shepherds pie, chicken and dumplings, soup, and stew, to name a few). He's getting better at feeding himself, though I still feed him breakfast (oatmeal isn't really finger food) and dinner (so that he gets a good meal before bed). He still takes a bottle, though this next month is dedicated to weaning (off both the bottle and formula). 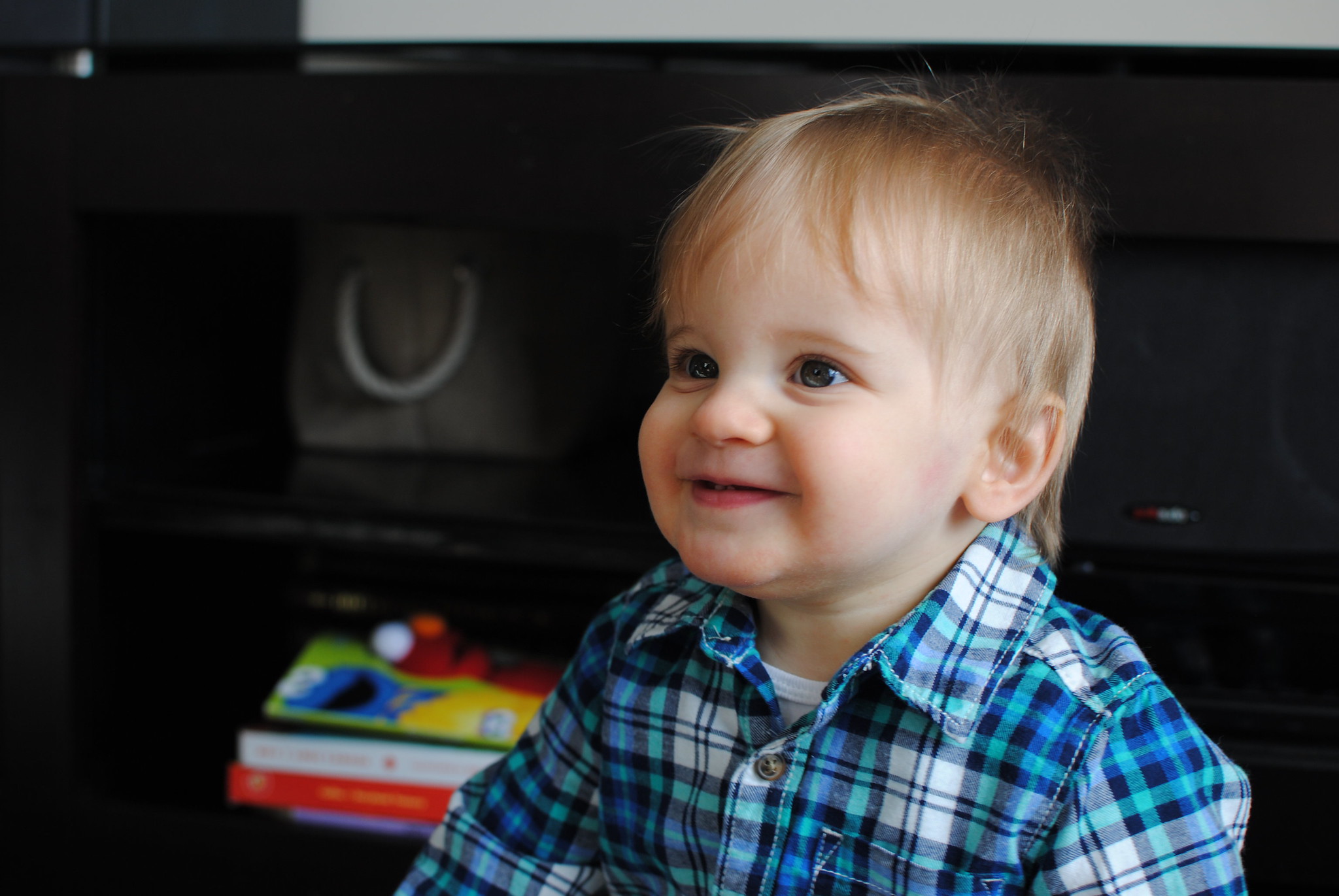 Speaking of the holidays, Marc was spoiled rotten! We had an advent "calendar" of wrapped books for him - so by the time Christmas rolled around, he was well rehearsed in ripping paper. Opening the box? Not so much. He did enjoy playing with the boxes though.. haha. I've kept out all his new toys too (I'm going to put a few away soon so that I can rotate them and keep them "fresh" for him), and he's been playing with all of them daily. He's great at independent play - though prefers when I'm sitting in the living room chair or - even better - on the living room floor. 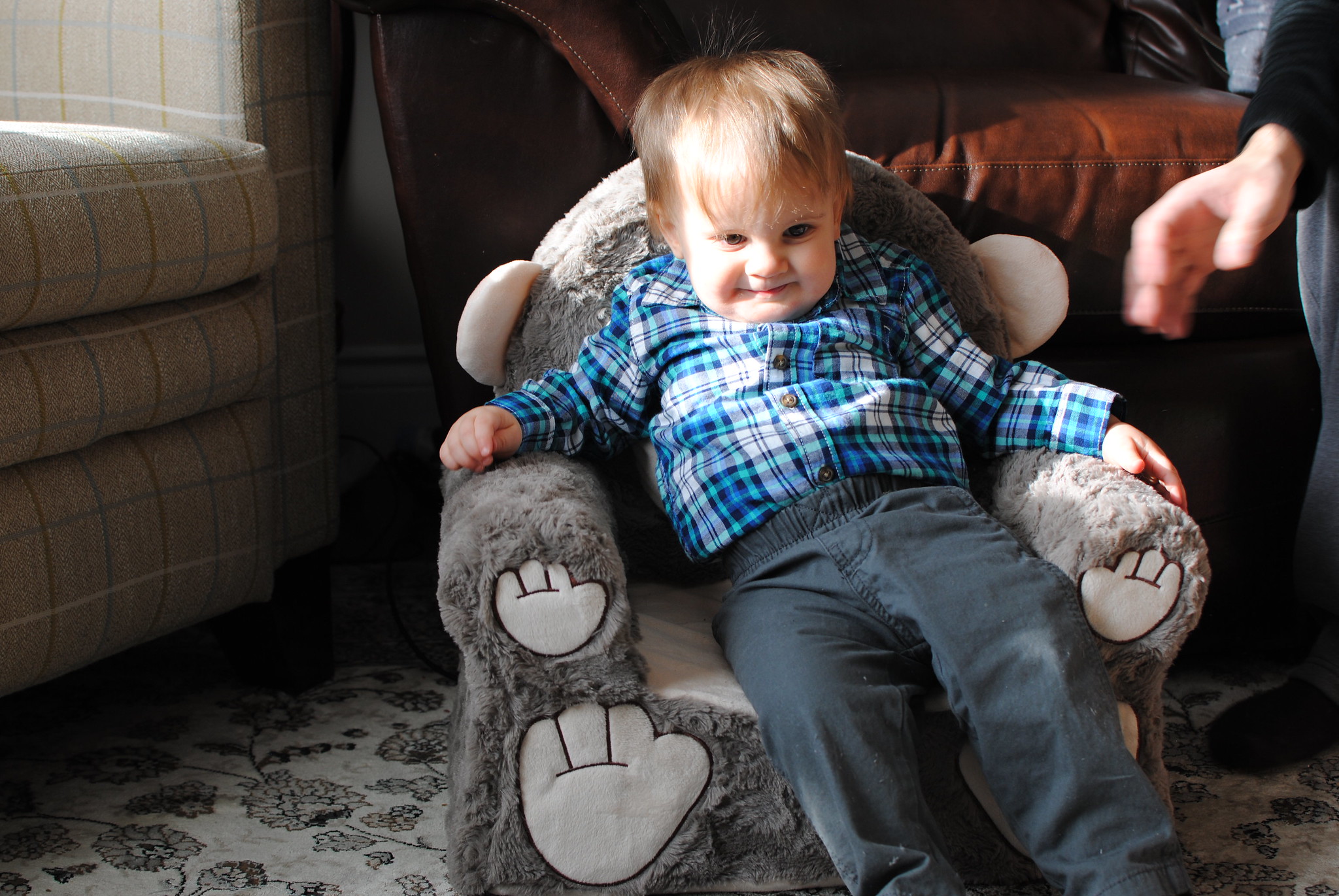 Marc is playing more and more appropriately with toys: stacking cups and rings and "driving" vehicles. Cars and trucks are still his absolute favourite. He also love anything with music - he received a few for Christmas and plays with all of them each waking period of the day. He also LOVES soft things. He'll pull the blankets off the couch and smoosh his face into them. His soft plush toys get the same treatment (so many wide-open-mouth kisses!). He also "reads" his books each wake time, pulling them off the shelf and paging through them. Needless to say, the trucks one Pat picked up for Christmas is one of his favourites! Unfortunately, he also likes pulling mommy's books off the shelf.... and still doesn't quite understand the meaning of NO (or rather, he does, but likes making me get up to stop him..). 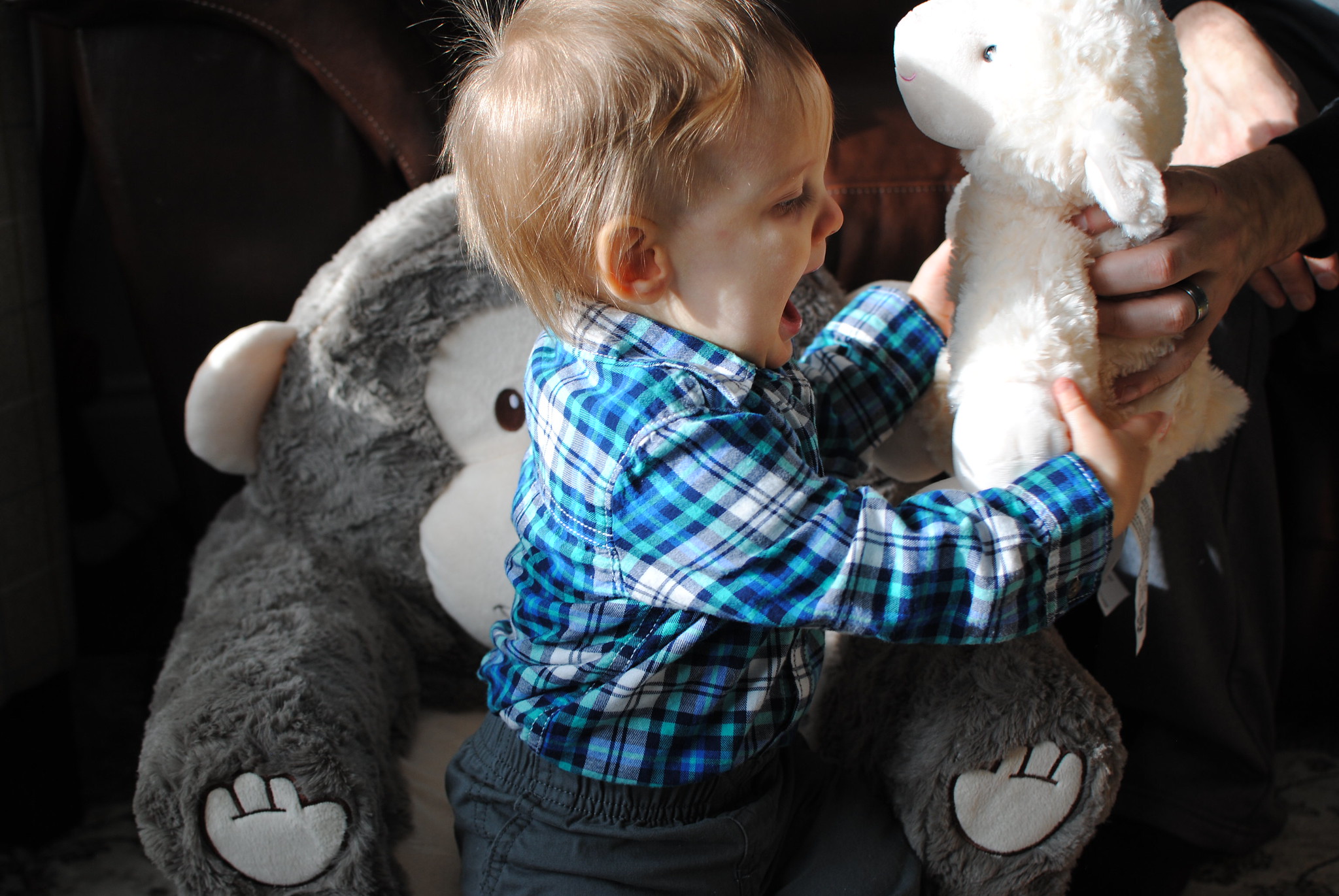 Lately, he's been imitating us more too. Blowing raspberries is his favourite - he'll do it in response to kissing noises as well as blowing and whistling. He'll lift his hands with I tell him to (during diaper changes) - sometimes hesitantly because he knows the tickles are coming! He's waved a few times recently, has started handing us things (especially little pieces of dirt or dust) and has managed to stand up without assistance... though these developments are post-11 months I think. The days really blend into each other! 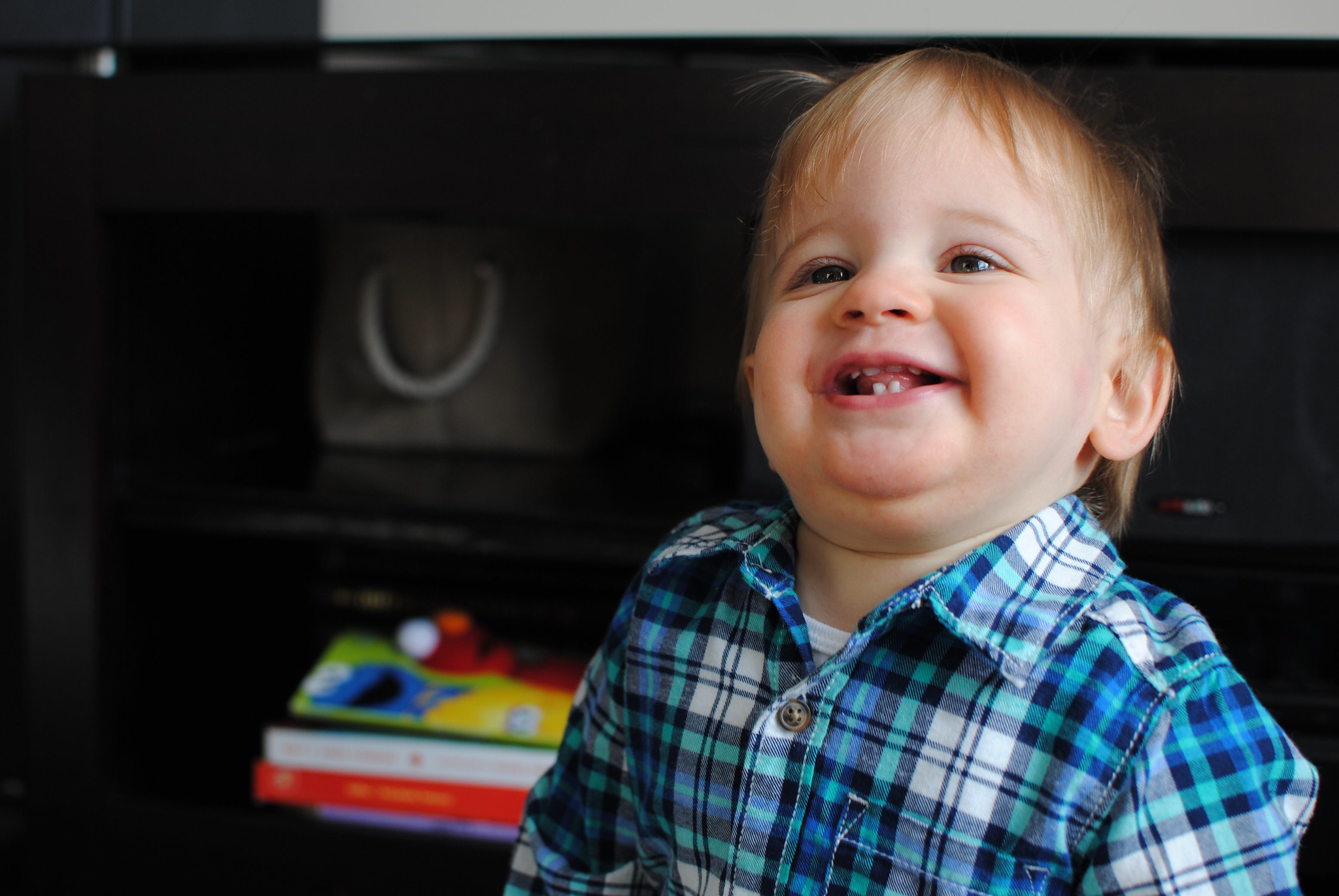 We've been cloth diapering almost exclusively for a few months now. The only time we used disposables within the last month was to travel (four hours in the car each way - the short trips between our parents was fine with cloth). And shortly before the holidays we started using cloth overnight. I use a fitted diaper with a cover and hemp doublers for extra absorbency. It's been great! I love our cloth diapers... I wish I hadn't waited to long to start! 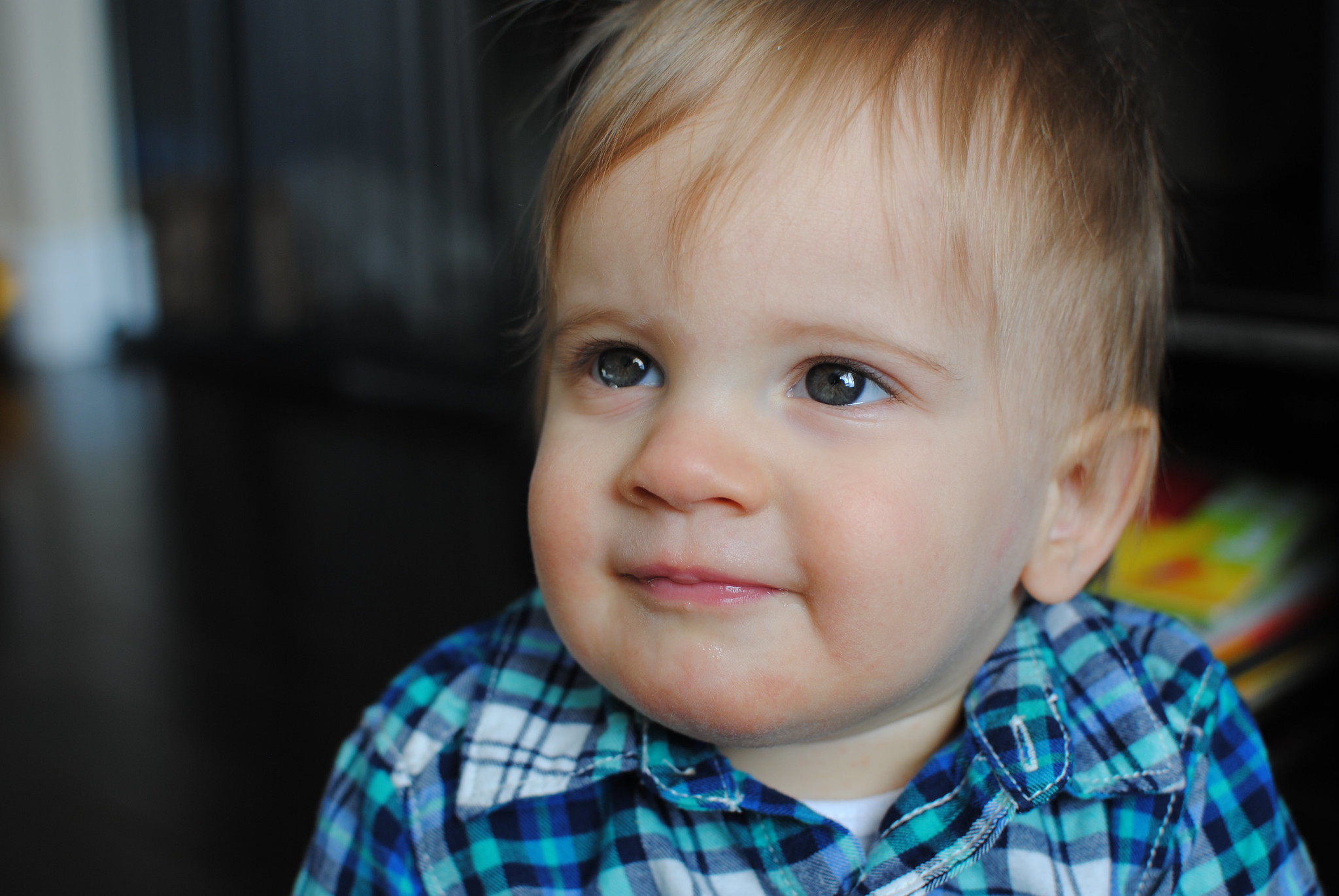 We've upgraded to 12-18 month clothes this month. It's always so heartbreaking to pack away my favourites... but so much fun to try on new things! The sleepers are always the first to turn over - especially now with the extra fluffy nighttime bum! It's funny to me how variable different brands are in their sizing - some are really wide but short and other long and skinny. And within the same brand the fleece sleepers are smaller than the cotton... so weird. Just means we have a few different sizes that fit right now.. and he already seems to be outgrowing some of the 12 month sizes... yikes! Slow down little man! 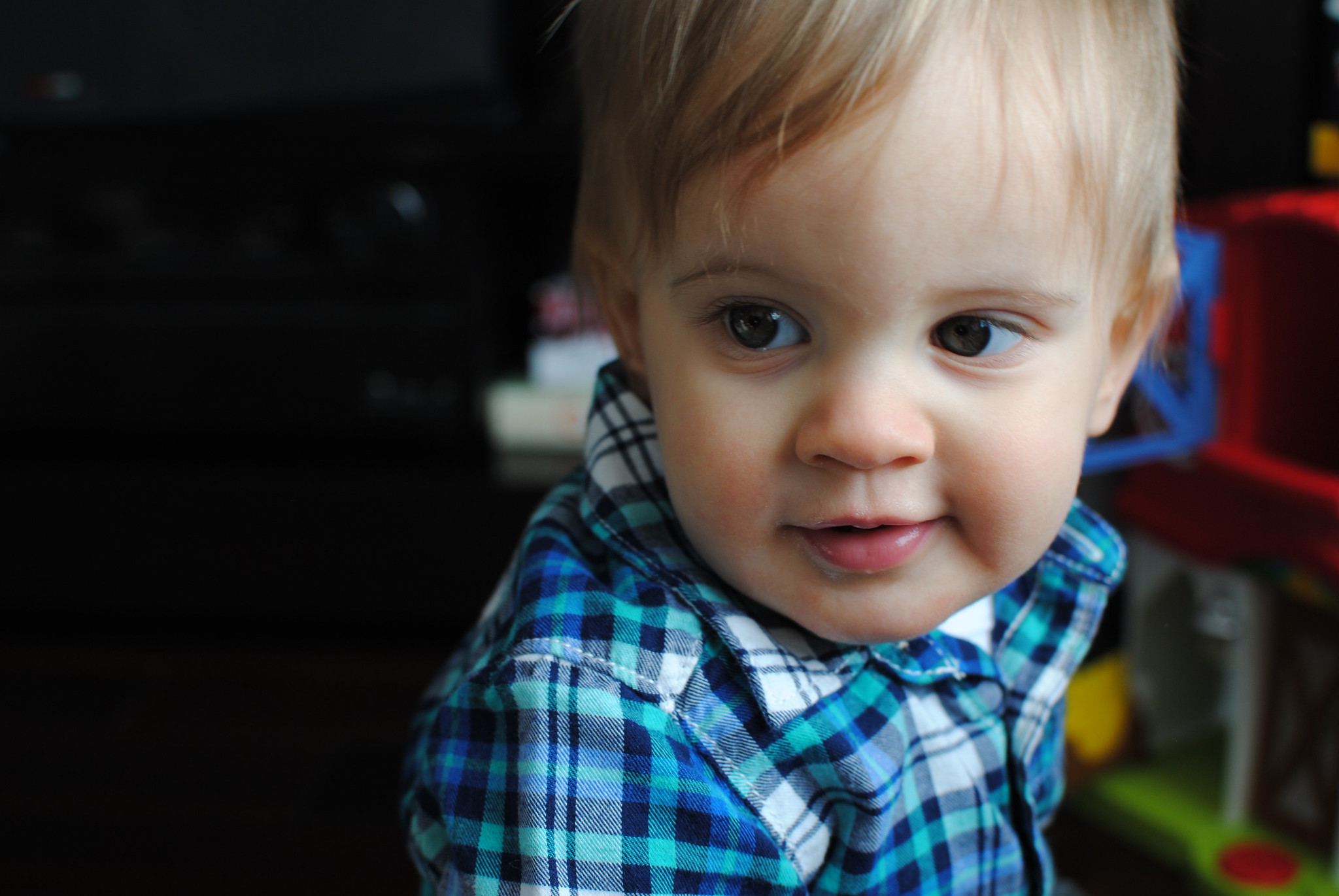 This coming month is all about preparing for daycare. The biggest thing I'm unsure about is wake time. Currently, Marc wakes up around 7:30. I need to be on the train at 7. Do I wake him so we can all leave together? Or do I head out while he's still sleeping and Pat gets him ready to go? Not sure what our best bet is... I just know, based on our schedules, Pat will drop him off and I will pick him up. Otherwise, I ordered clothing labels with his name on them yesterday. And I need to contact daycare next week to set up a few days where we can slowly transition before our start date. Oh how I'm dreading the 5th of February! I know Marc will be fine once we get into the routine... but my heart?! Oh man. NOT excited one bit.
Posted by Amanda at 9:00 PM