I've been meaning to get this post up for a couple of weeks now - before the lines start blurring and I no longer know what milestones Marc reached in months 8 or 9. I'm going to try to keep this to things he was doing 2 weeks ago (already there are new things he can do!). This little man is growing way way WAY too quickly! 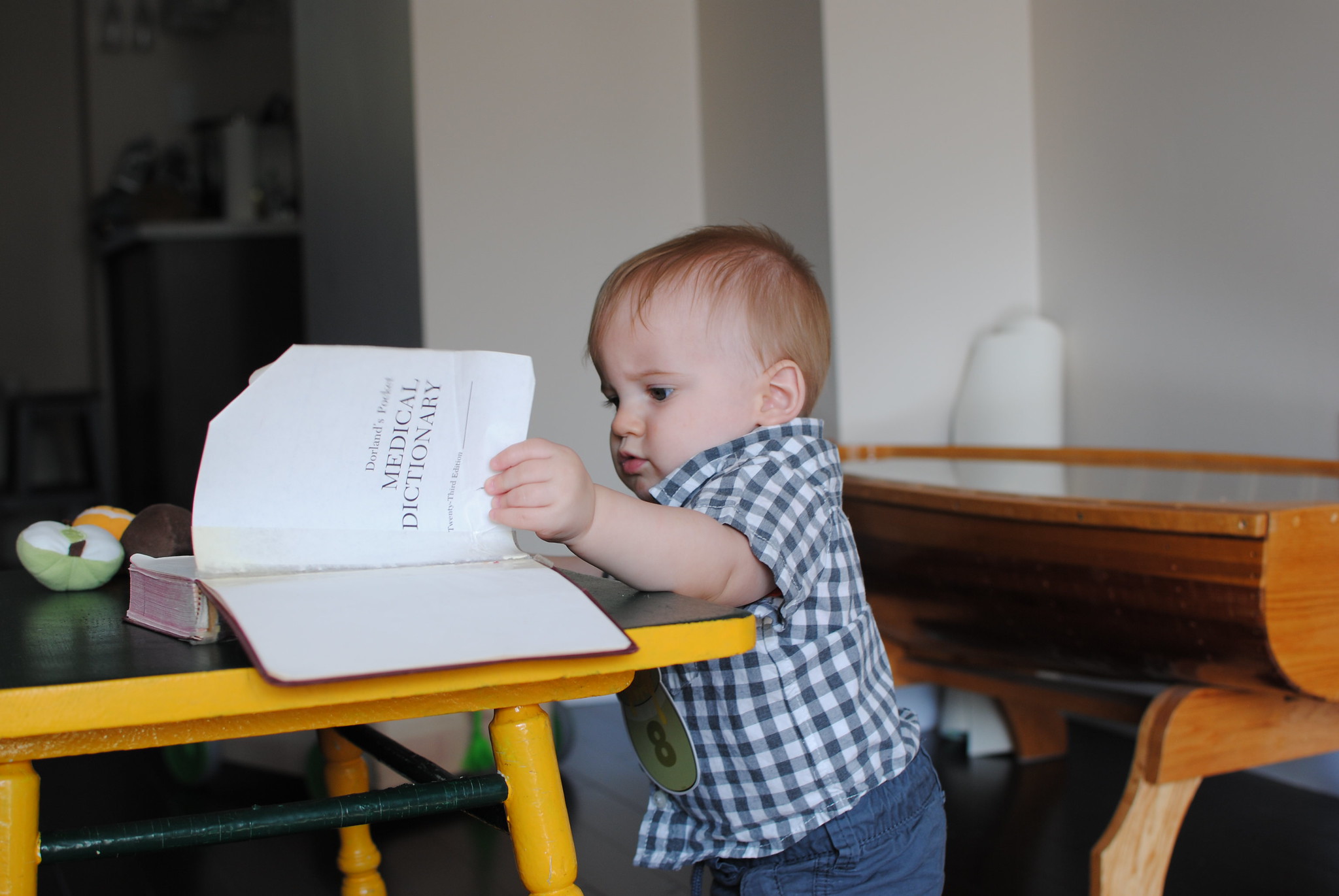 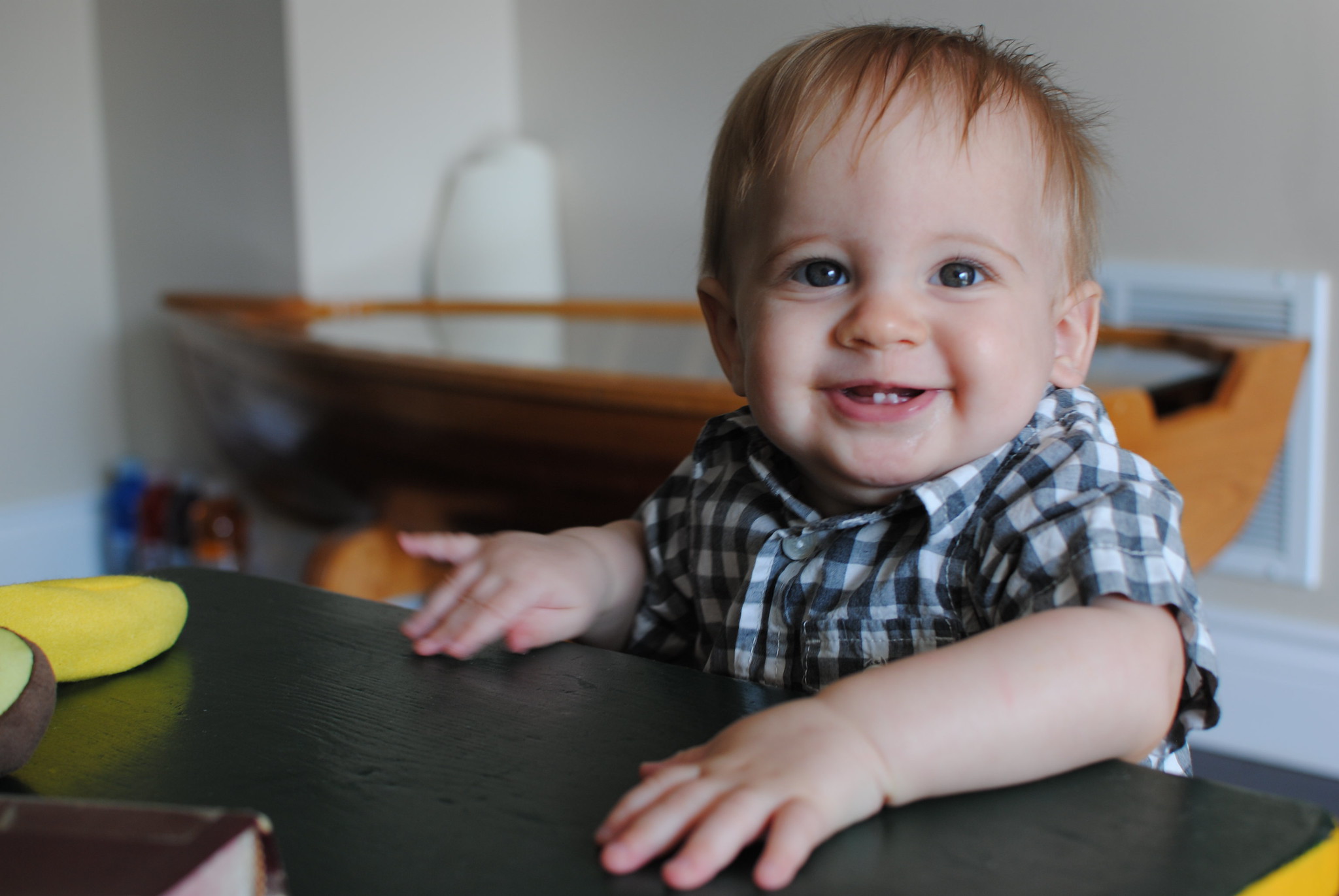 This month wasn't so much about learning new tricks as it was about finessing. Marc is practising everything he can do: crawling, standing, climbing, walking and exploring everything he can get his hands (and mouth) on. He can creep all the way around the living room now - from TV stand to window to chair to couch. He's still army crawling, but is really trying to lift his belly more and more. He can climb up the stairs like a pro (mastered that on his first try!) and opens any drawer he gets his hands on. He's getting stronger and stronger every day. 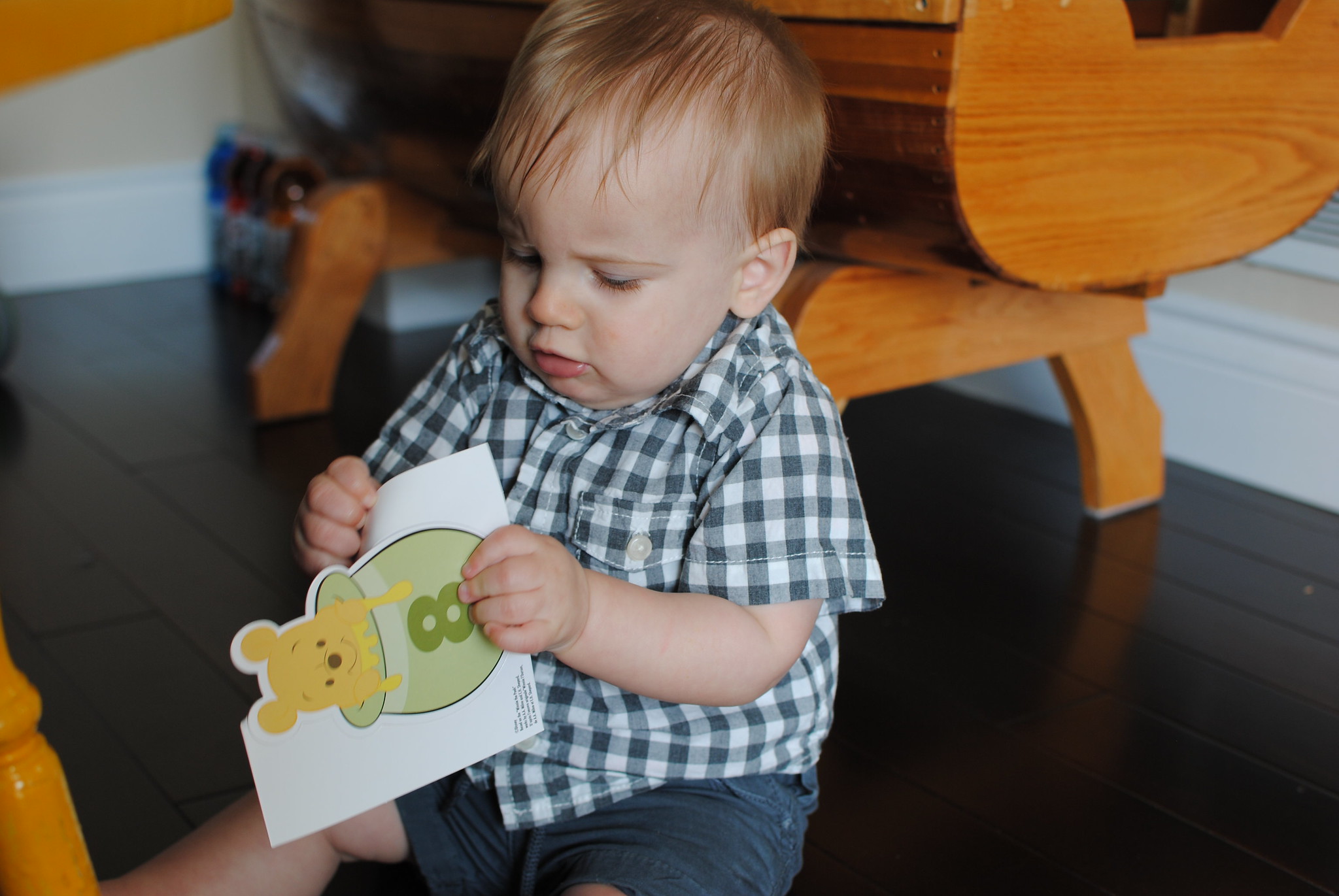 He has his two bottom teeth and 2 bumps at the top (the two beside the two front teeth). Those bumps have been there a while though - a lot longer than the bottom ones before those erupted. They've come through now, but they weren't out yet when Marc turned 8 months. He's babbling a lot more, making tons of "nanana" and "bababa" and similar sounds. He gives the sweetest "kisses" (mouth wide open - "aaaaah" - eyes closed, shaking his head side to side as he head butts you). He eats like a champ (though dislikes any new vegetables until he's tried them a few times, usually mixed with a favourite) and has 3 solid meals now (plus his morning bottle). I'm still making all of his food and having so much fun with it. 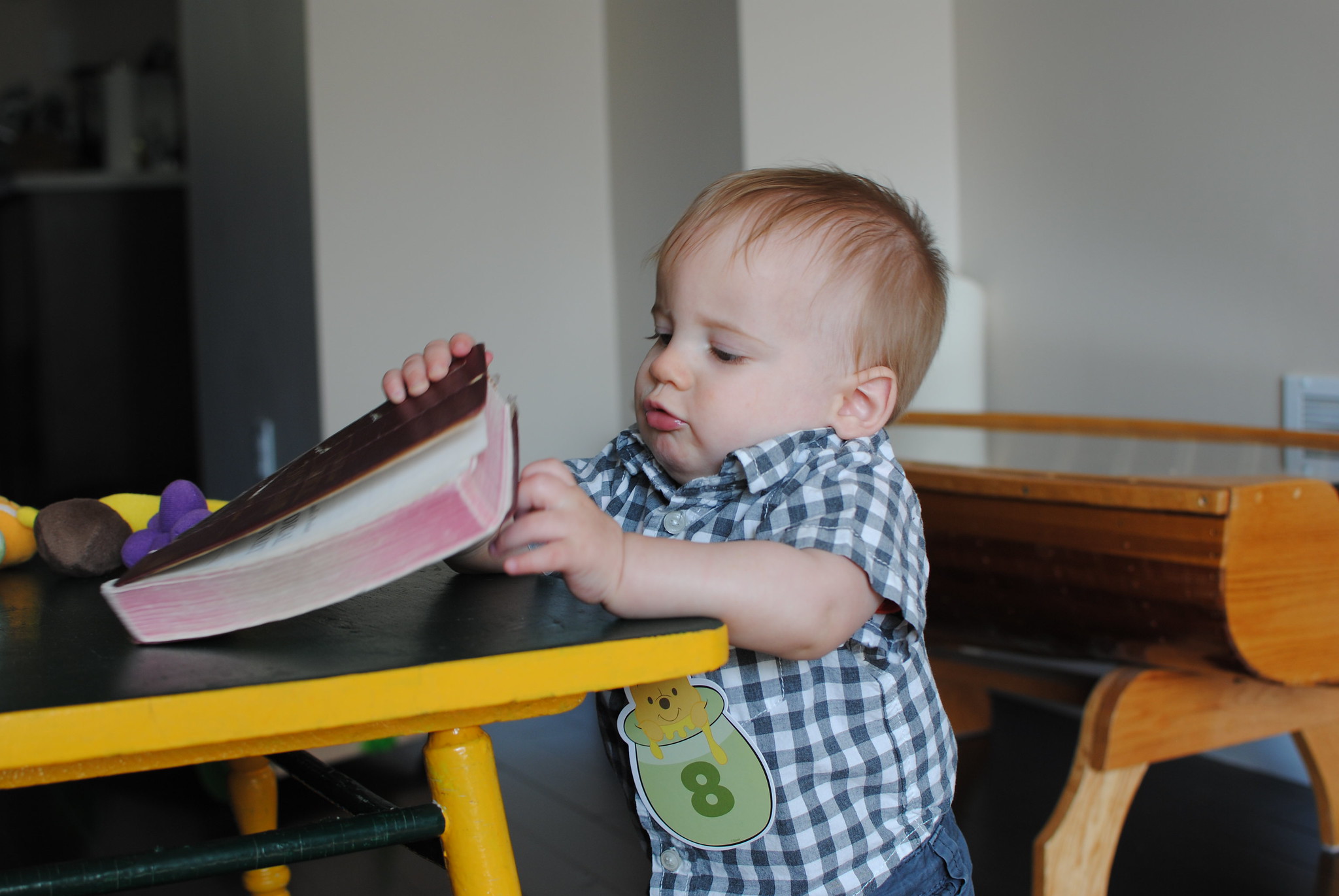 Marc loves the pool: we're there at least twice a week. We went downtown twice (he was amazing on the train both times). We go to a drop-in session at an early years centre (in an old age home) once a week - he loves investigating all the new toys there, especially the big trucks. We bought a little cart / toy box on wheels at IKEA and he loves pushing it back and forth across the living room (on his knees as it rolls too fast for him to get up... or at least it was up until a couple of days ago). Marc loves books and is constantly pulling them off his (or my) bookshelf and pages through them (or munches on them). 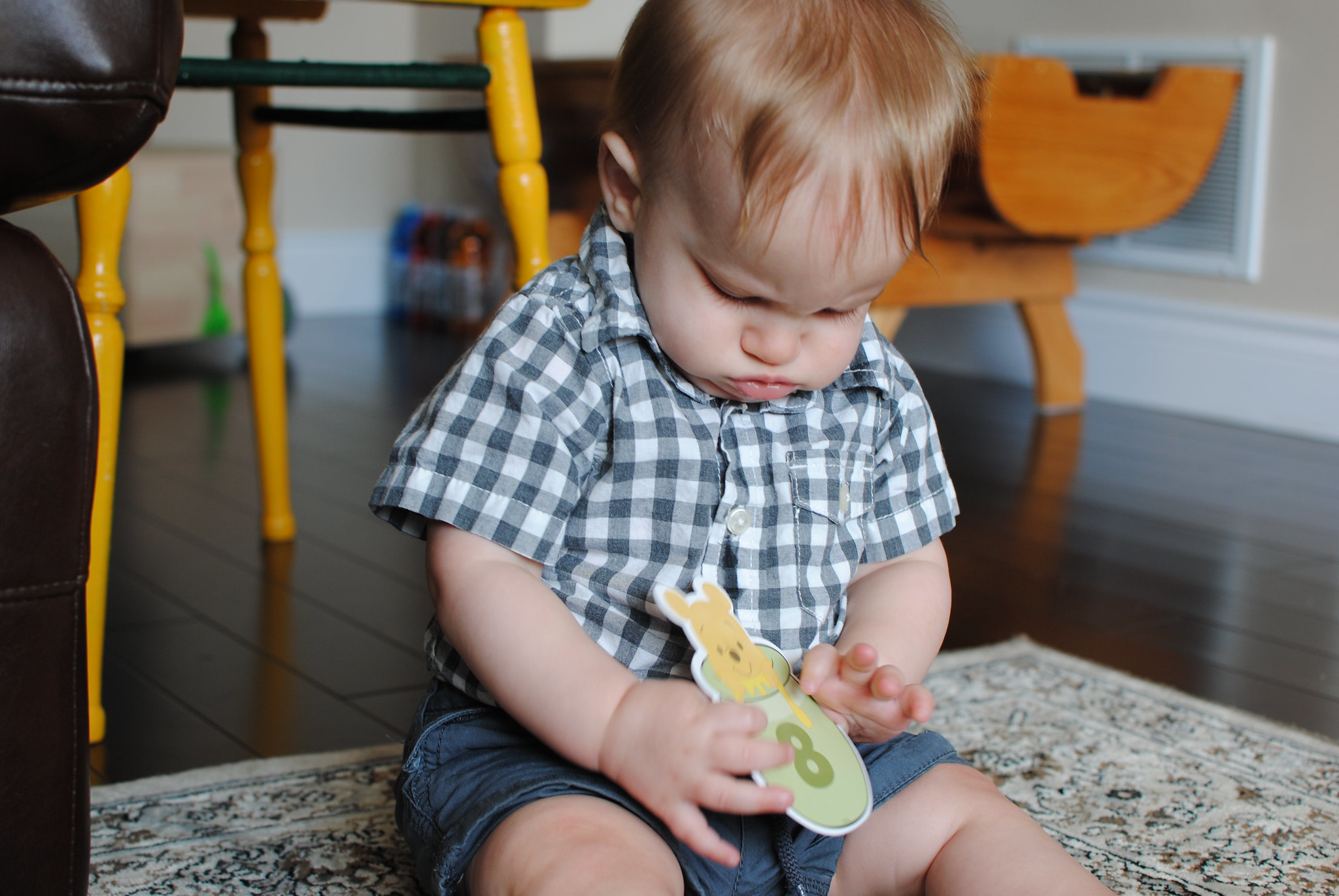 We secured daycare this month. I'm so not looking forward to February! It's going to be hard. He'll have his own little life that I'm not a part of anymore... but he'll be fine. Once we settle into a routine, I know he's going to love it. 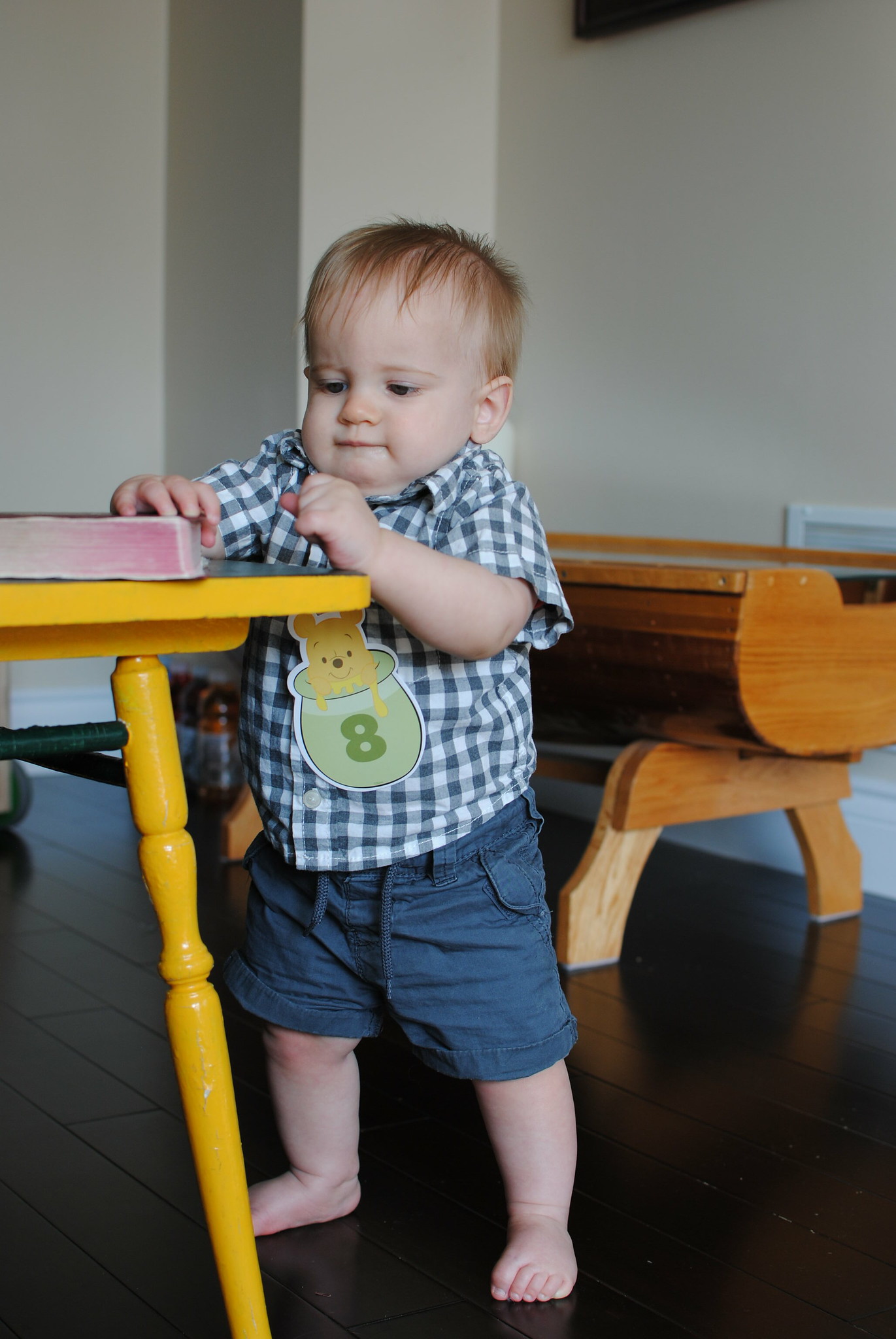 Marc is the best part of each day. Watching him with his daddy makes my heart explode every time. Here's to another fun-filled month of discovery!
Posted by Amanda at 11:28 AM