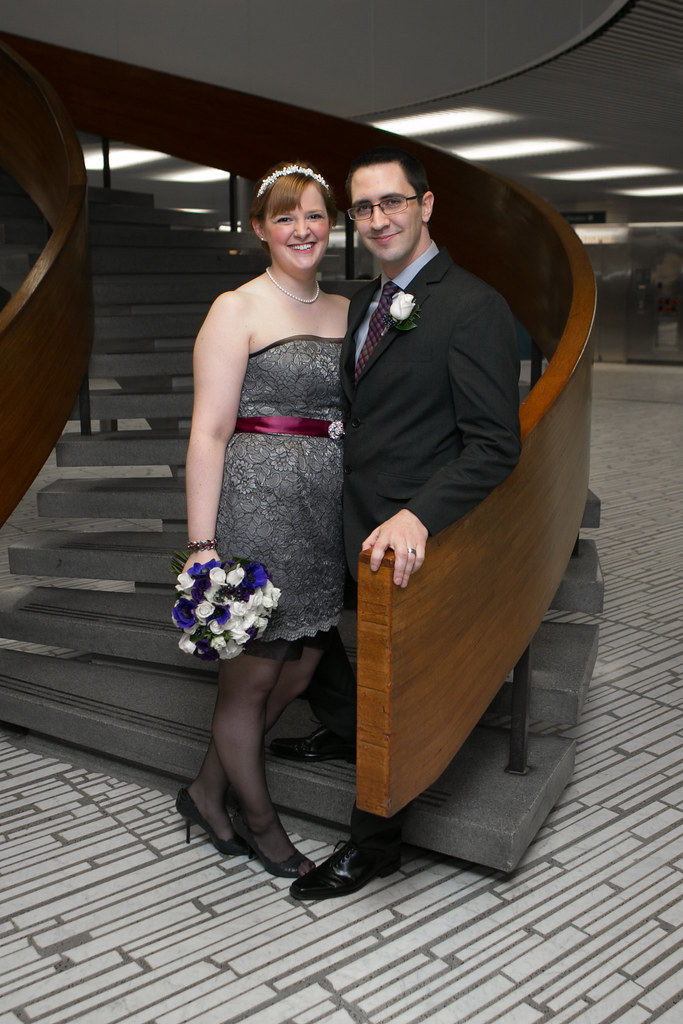 It took a bit of convincing - Pat wasn't so sure that I wouldn't want something bigger in the near future - but finally he was convinced and we bit the bullet. Once we found my ring, it took about 5 weeks to plan... in secret! That's right, we didn't tell ANYONE! After 13.5 years together, I wanted something low-key, sweet and simple and I wanted it to be just the two of us so that right afterwards we could escape on our honeymoon. It was perfect! 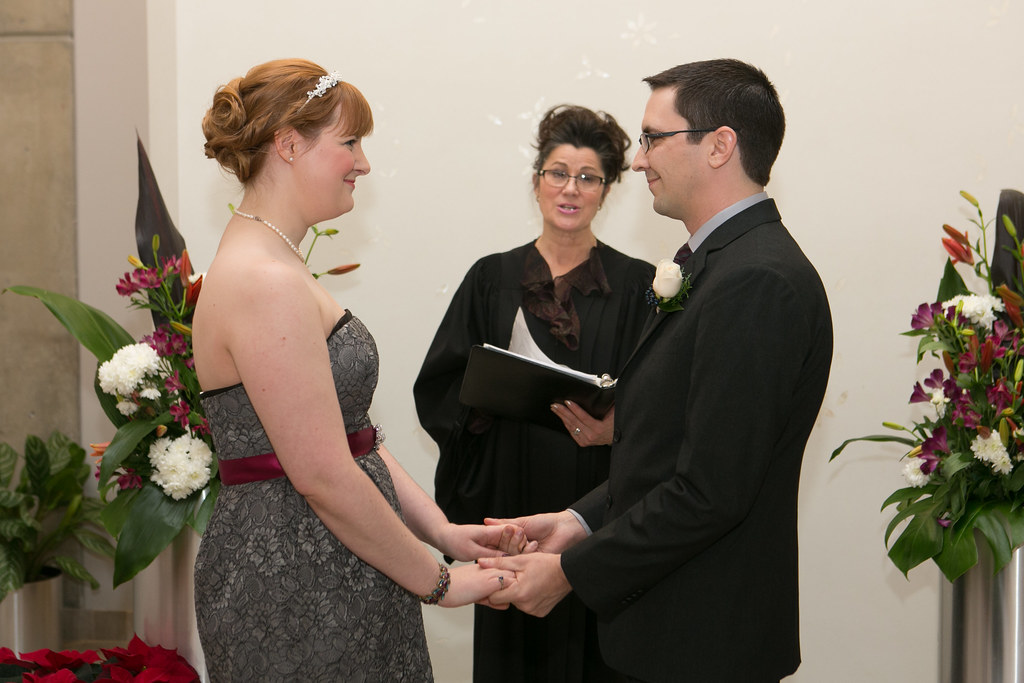 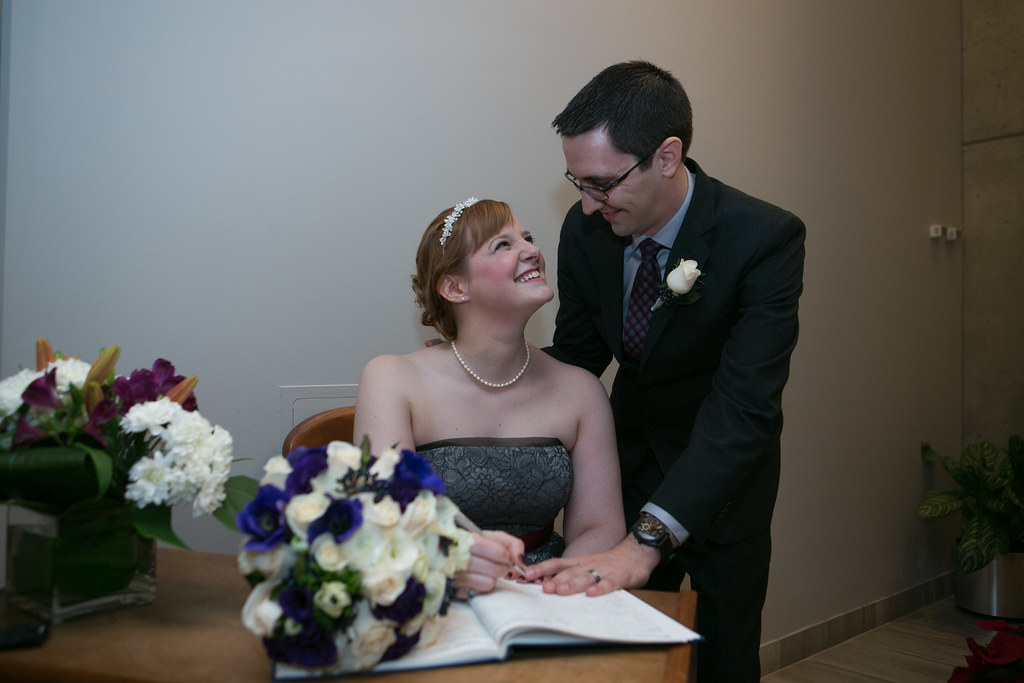 We were married at City Hall in Toronto and "ran off" to Niagara Falls for 2 days afterwards. I'm calling that our "pre-honeymoon" since we are planning on going somewhere further away for a longer time. We just haven't decided exactly where/when yet. 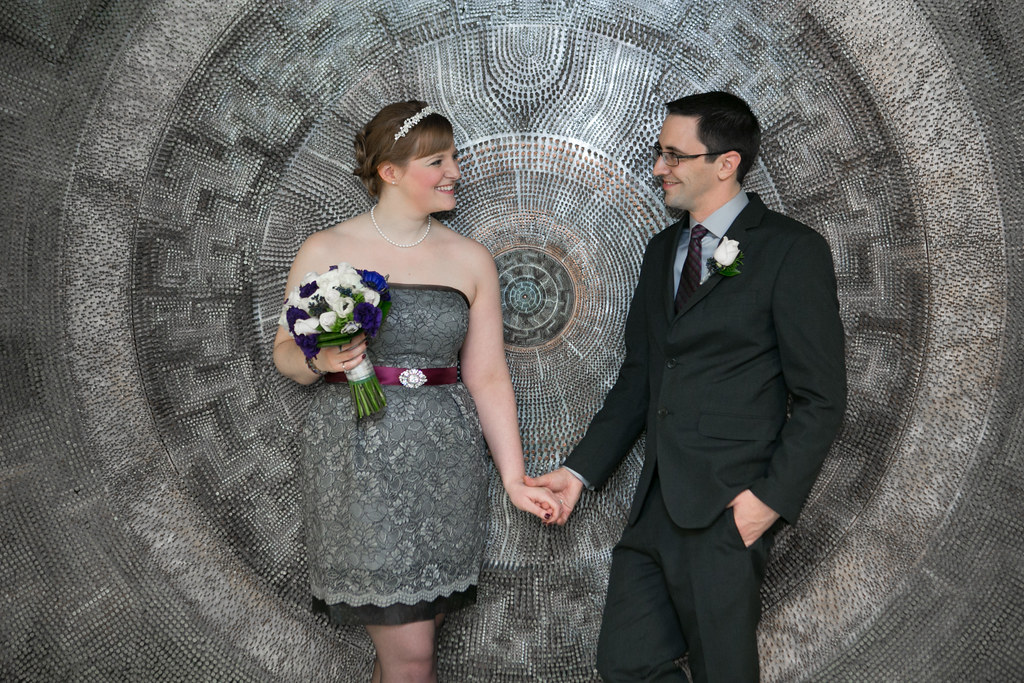 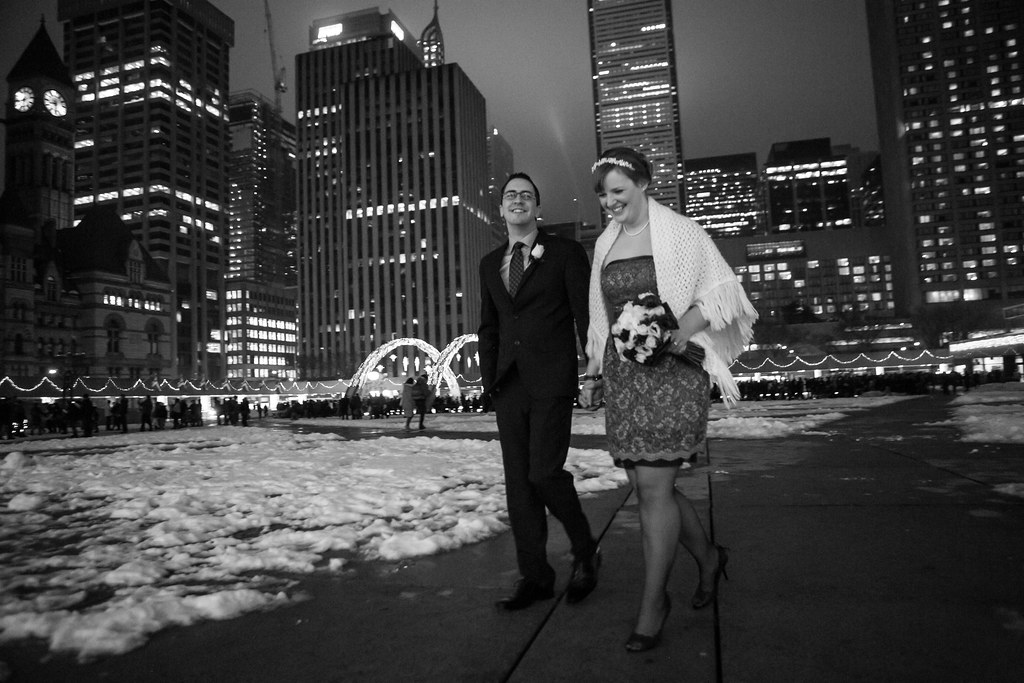 I'm really happy with how our photos turned out - all those posted above were taken by the photographer recommended on the City Hall website. The rest below I took in our hotel room the next day. 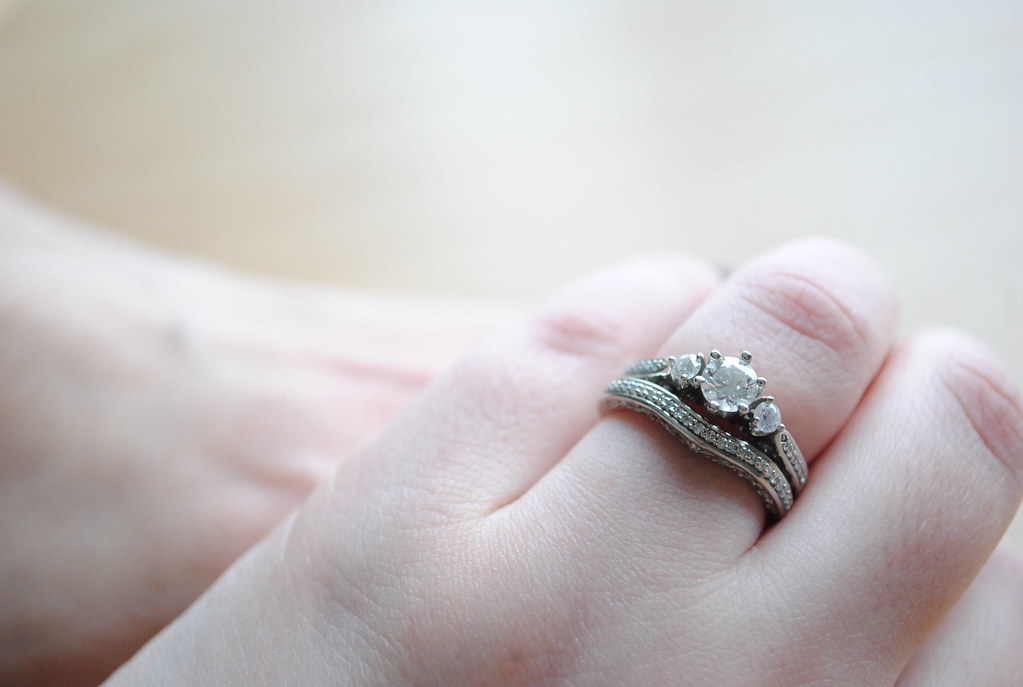 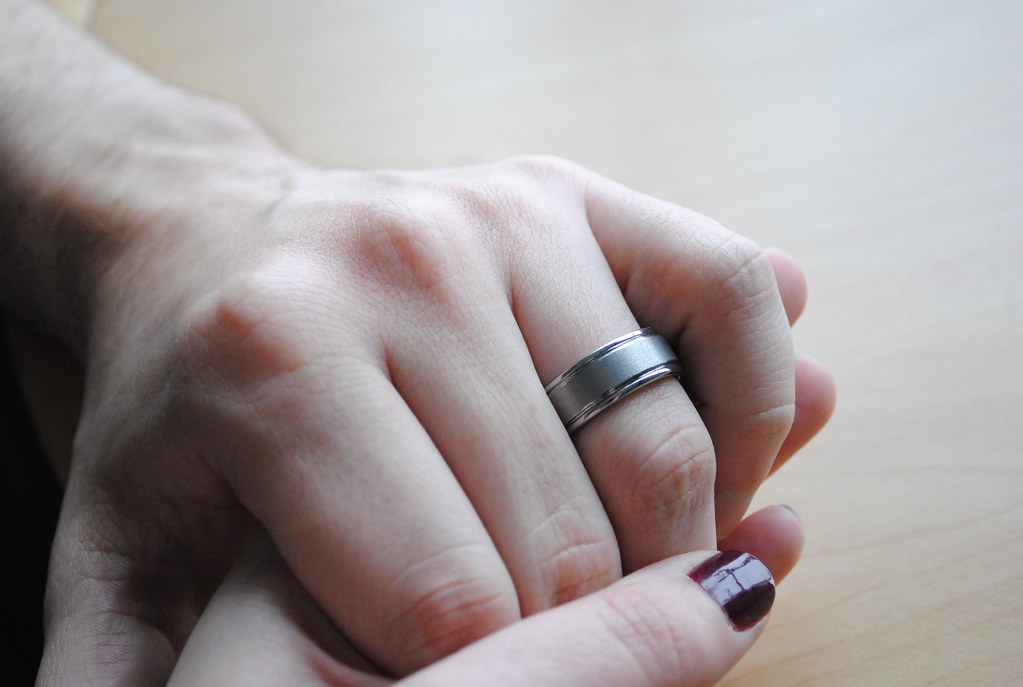 I found my ring at Spence - it was exactly what I wanted: 6 prongs on the diamond, low-profile and a gorgeous "side" view (not shown, but there are more diamonds / scroll-work on both rings along the side edges). We found Pat's ring a few weeks later at Ben Moss.

My dress and headband came from David's Bridal. I wanted a short dress and was leaning towards lace. They only had a few short white dresses and the only lace one was not flattering at all. As soon as I put on this grey one though, I knew. It was perfect. 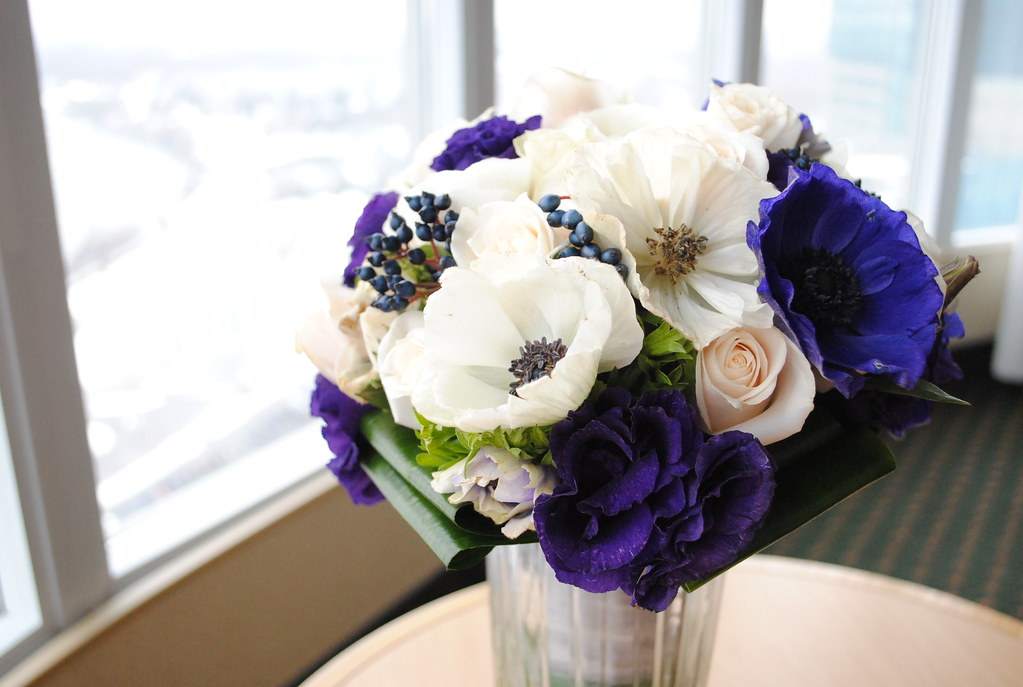 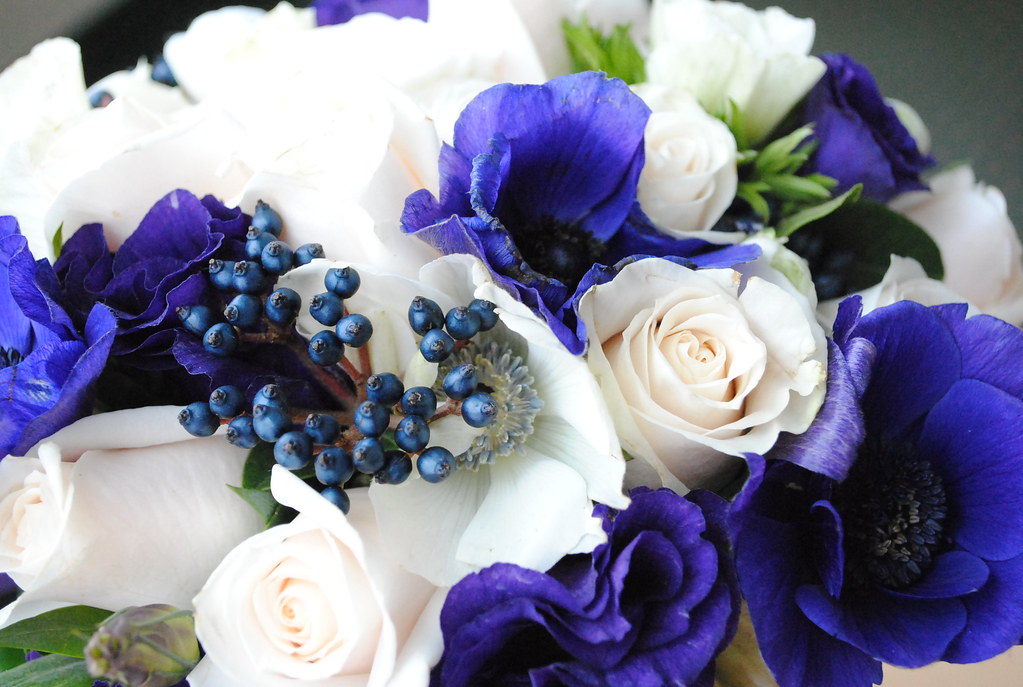 We went to a local shop for my flowers - I was a bit worried on how they would turn out. I had seen a bouquet online that I liked and went with a few flowers in mind: anemones and ranunculus and those viburnum berrries. I was told that due to the time of year they wouldn't be able to order the anemones and only maybe would they be able to get the ranunculus. But surprise! I have both in my bouquet! They're all a bit more blue/purple than I imagined, but the bouquet was beautiful beyond belief. I absolutely loved it - and the jewel-tones of the dark purples matched the burgundy I had picked out for Pat's tie, my ribbon sash and my nail polish. 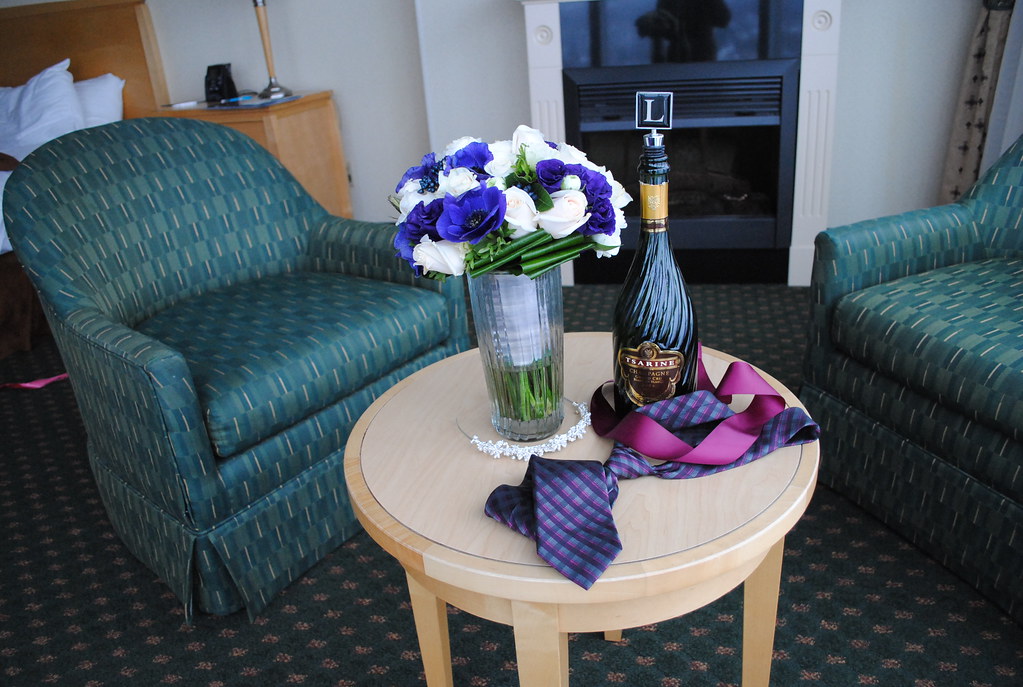 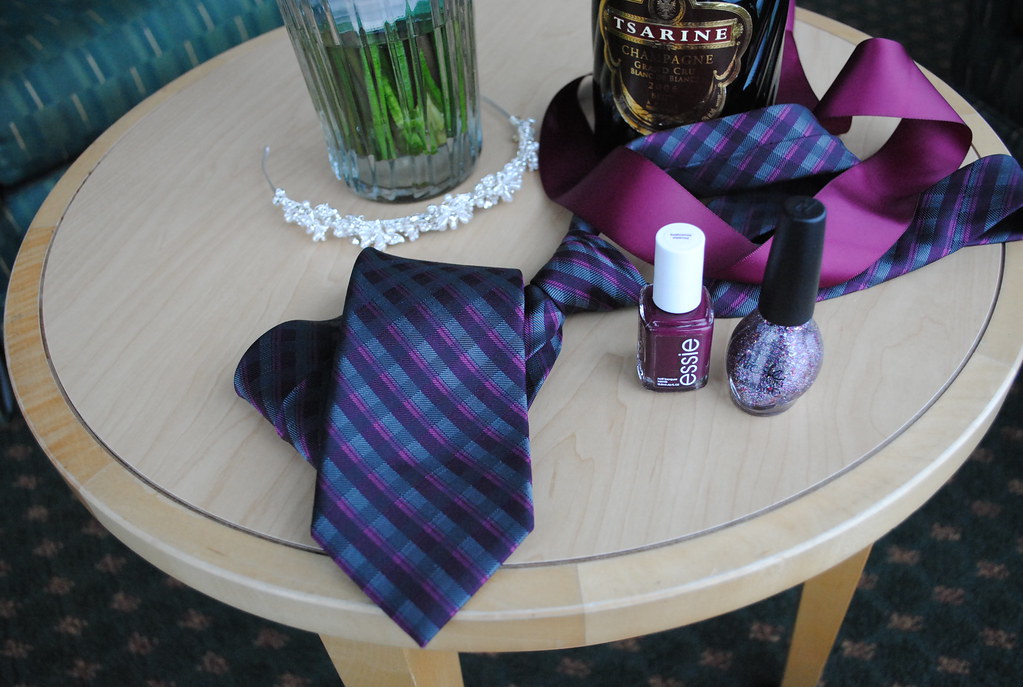 After that whirlwind fairytale weekend, we had to tell our parents. Yikes! I was more nervous about that than the ceremony! We put together a scrapbook album for both and wrapped it as an early Christmas gift. It went over VERY well - everyone was very happy for us. It was the best surprise ever! 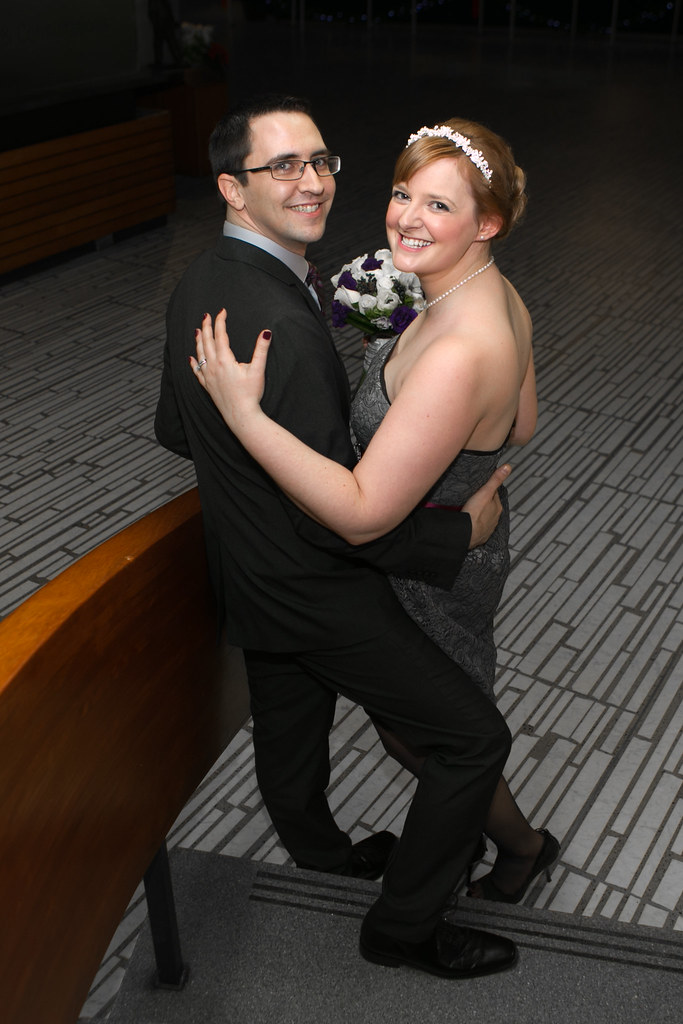 I think of one the neatest things about the whole event was the story my gramma told me after she found out. I wore a white wool shawl when we went outside for a few photos - it belonged to my great-grandmother (my gramma's mom) and was my "something old". Apparently (I didn't know this and neither did my mom), my great-grandmother also eloped! During the great depression, married women couldn't work, so they kept it secret for almost a year in order to keep her job. And although she didn't have the shawl at her wedding, it was hers and I thought that was pretty serendipitous.

I'm looking forward to making this first year of married life the best year yet!
Posted by Amanda at 1:01 PM

Congratulations to both of you!!

Congratulations! I sort of eloped too and it was the best decision. Much happiness to you!